The world is round

You know it’s a great start to the summer when:

…however this is not an accurate measure seeing as how April takes very long bike rides in every season. What I have not done this season is bike to work, which feels a bit foolish considering it’s quite a good ride. I spent my Independence day being independent, on a 25-mile loop from the house, out past Chatfield, then down to Waterton Canyon. This lower section of the High Line Canal has been on my ride list for ages, as the trail gets interrupted on the southeast side of the park. Sat view makes it look like there’s a tangle of driveways and private roads to reconnect, but it’s actually really easy to just cut through the state park and reconnect with the trail, especially with a path so new it’s not even on the map yet. Chatfield is always busy with cyclists, but there are a handful of mostly gravel routes that are always my favorite. Gravel lends itself to a more solitary ride, as the carbon-fiber Lycra crew won’t find it comfortable or fast enough. It suits me and my steel Long Haul Trucker just fine. Gravel is exactly my speed. 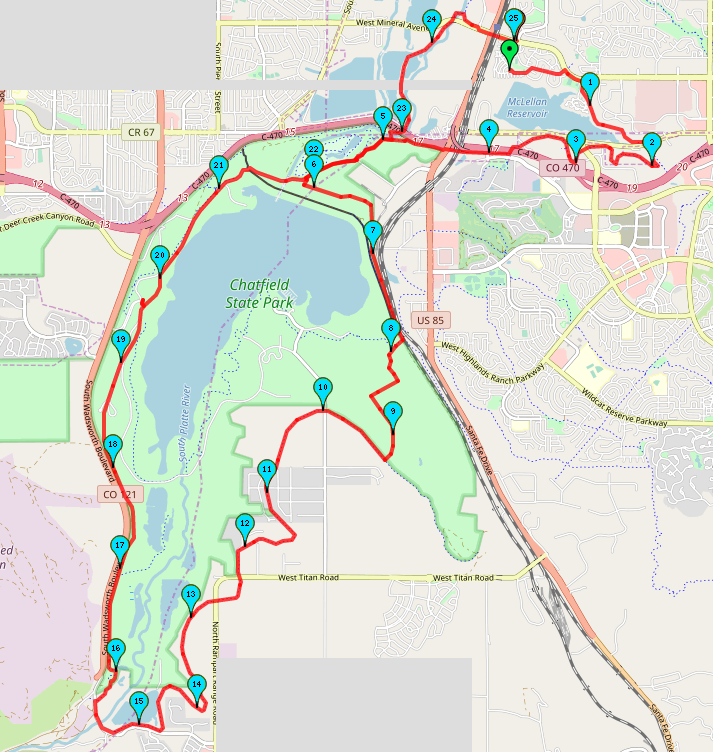 I feel really lucky to live within a few miles of a lot of great trails. High Line is really fun to explore as it winds through all kinds of neighborhoods and feels like you’re really far away from the city as you cross or dip under major arterial roads. It blows my mind to ride through deKoevend Park with University Boulevard just twenty feet away, across the trees and the canal. You’d never know the other was there. There’s a ton of natural areas and open space that add to the feeling of seclusion. On my Thursday ride, I got into Chatfield from the 470 trail on the east side and started up Perimeter Road. Perimeter puts you on the south side of the dam, and just past the fish planting base is an unassuming gravel service road which runs parallel to the earthen dam. It’s so much less traveled, almost to the point where it feels like you’re not supposed to be there. It’s not marked on any map I’ve seen, either. But, there are signs saying “keep dogs on leash” and what-not, so it’s definitely open. It links up with the main dam trail and the last traversable section of the upper High Line (relative terms to me) and also down into the park to the Plum Creek area. It’s surprisingly quiet, considering how busy the rest of the park gets, but I suppose most visitors are there for the water and not the land.

This little cut-through at Plum Creek gets you back on to the High Line after a really annoying asphalt section. There are some older asphalt bits around Chatfield and they have awful cracks that just rattle your frame. My advice is to aim for the grass growing in the cracks and roll over it to smooth out your ride. Luckily it’s only about a mile before you’re back on the glorious gravel. The High Line brings you back to the south entrance of the park and then continues out into Douglas County through some fancy farm neighborhoods and the most equestrian section of the trail. At one point, I passed through a working ranch and had to open and close a couple of gates. That was kinda neat. I got close to the Waterton Canyon trailhead and stopped for a bit in front of the Platte Canyon Reservoir. I figured it would be much less busy than the Canyon itself, and I was right. I had made a small PB&J tortilla wrap with lots of flax and chia, and some iced green tea to power through the rest of the ride. High Line is relatively flat, there’s not a lot of elevation change so it’s a nice pace, but my route back through Chatfield necessitates some hill climbing. The header image for this article was taken during my lunch break, looking out across the reservoir towards Lockheed. 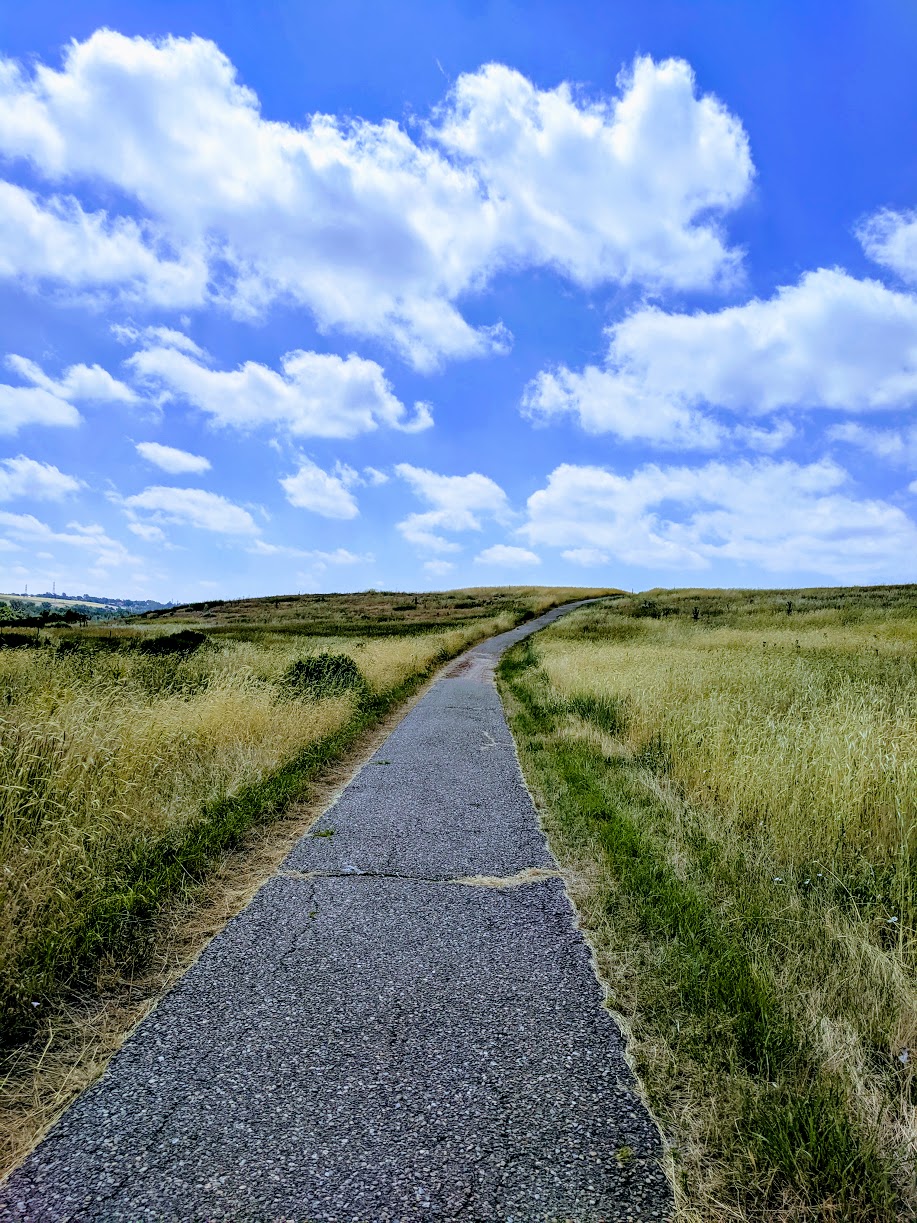 After lunch, I lazily rode into the Waterton Canyon parking area, which was predictably packed. I rested up for a bit and tried to get my Fitbit working with connected GPS, but there’s some stupid issue with location polling for 3rd party apps in Android Pie…so no easy automated route tracking for me! I had thought about riding through Waterton but considering the crowds and it being just a 12-mile out-and-back that I’ve done before made it pretty unappealing. Instead, I continued on my planned route back north along the Platte Canyon Ditch. This little trail runs along Wadsworth through the South Platte watershed and up into Chatfield. Everyone was taking advantage of the somewhat coastal-feeling weather and the holiday, because every parking lot I rode past was filled. Park rangers were out in force directing traffic, but people were friendly and observing the speed limit. I’d originally planned to head up the north side and get back on the 470 trail, but missed my turn-off and rode back down Perimeter Road instead. Really, that was probably better since the temporary trail on the 470 is in really garbage condition. The last leg of the ride went along the Mary Carter Greenway to Mineral, then back up the hill and into the neighborhood. I was definitely tired, but not as spent as my ride from Sunday. I’m getting my legs back!

Long rides like this are such a nice way to relax. Of course I had full cell service and my Xperia Ear Duo earbuds, so I enjoyed lo-fi beats the whole time. I love when my music, mood, and activity all line up just right, and I love these earbuds because you can still hear what’s going on around you. It’s like a little bit of background music to go with birdsong, gravel crunch, and light winds. This ride was 4 stars, with one star knocked off because I had poor sunscreen coverage and got a slight burn on my back and neck. Ouch.

Friday, Juston had to work so I spent the day cleaning the house. It was slow going and I was plenty sore from the ride, but I managed to get everything done in time for dinner, and I even made brownies from scratch. I daydreamed about moving away to a paid-off house where I could spend less time working and more time exploring the world or trying out new things (like scratch baking) that I just don’t feel like I have the bandwidth for now. Long weekends are a nice window into how you like to spend your time when there are fewer obligations.

Round world, round ball

World Cup is wrapping up, I’m considering if I want to watch the final at a bar or if I should just enjoy the comfort of my own couch. There are lots of NWSL games yet to be played, including the Thorns/Reign matchup in August that I have tickets for! It’s easy enough to watch games on Yahoo Sports but they’ve just signed a deal with ESPN to air 14 matches on TV, which is really exciting. I don’t know how I slept on women’s soccer for so long, my guess is something to do with not enjoying most sports, and women’s sports not having as much of a presence in my life after middle school. Dad and I used to go watch the CSU Women’s basketball team play, he used to coach women’s soccer (which is how my parents met!) but in college, everyone was watching American football and baseball and all these other games I’m just not very interested in. I played camp soccer as a kid, but followed my sister’s path and joined band in middle school instead. Sports became an afterthought or a concert venue for the spirit band in high school, and I didn’t really bother with soccer again until recently.

Arakawa Naoshi of Your Lie in April fame started a new girl’s soccer manga back in 2016. I picked it up last winter since it’s being simulpub’d in the Crunchyroll Manga app, and it just clicked. I was pretty content to just read the manga, at least until the World Cup kicked off last month. Between the manga, NWSL games, and the Cup*, I’ve had to add a soccer ball to my Target shopping list. Y’know, just to kick around the park when I go on walks. It’s fun to try new things, or to pick up things you’ve left behind. I still dream of buying a clarinet, but slightly noisier activities require consideration when one co-habitates.

No doubt, summer is my time to get out there and enjoy this short, silly, and sweet life. I hope you get to do the same!

*Yes I am aware of CONCACAF and the Gold Cup but COME ON there is only one important cup right now.