Or, I Can See This Peak From My House.

South of Buffalo Creek and just north of Deckers is Long Scraggy Peak. It’s quite prominent, even from the metro area thanks to its eponymous peaks. I know I had seen it from Indian Creek area before, but it wasn’t until my trip down to the Lost Creek wildy that I really took notice. I was driving down CR-67 as the sun rose through the crags. I really wish I had stopped for a photo, but I was running behind. Maybe next summer…

A while later, I hiked the CT segment and the Chair Rocks with Long Scraggy in the background, and the whole time I was wondering how to get up there. Checking Gaia, I didn’t see any mapped trails, so I started to look around. Turns out, there’s a well-established social trail and some AllTrails routes, along with some trip write-ups. OutThere has a good one, along with this one by KX0R. 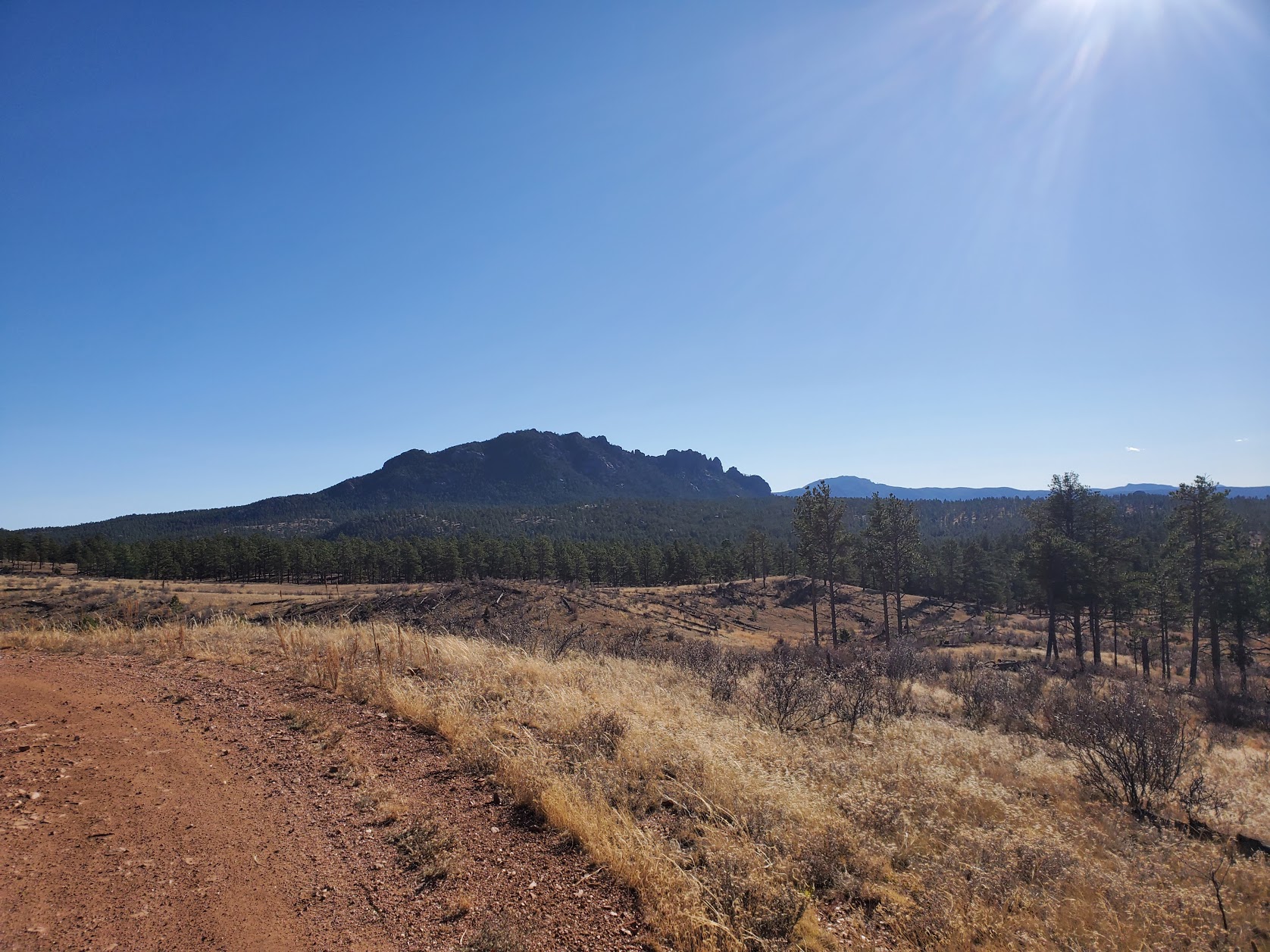 This would be my first off-trail & unmarked hike, so I did a ton of planning and mapped out a loose route. There is some private land (a ranch) just west of the mountain which I wanted to be sure and avoid, and it was also the start of the 2nd deer/elk season so I wore a hi-vis just in case. I did hear plenty of gunshots, but they were fairly distant. 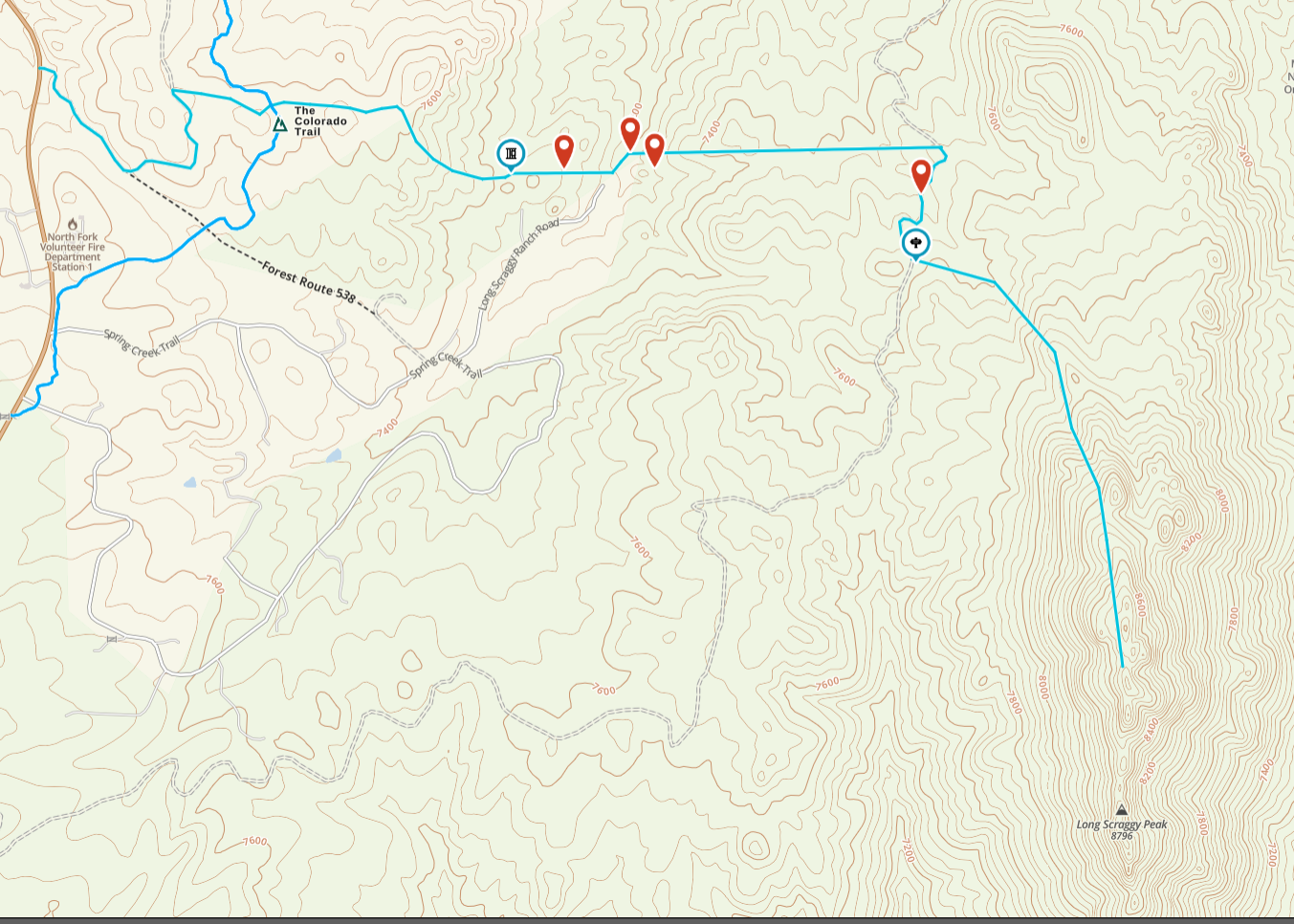 I got up there a bit late, maybe around 9:00, and made my way up the forest road. I turned off at the sign (about 2/3rds of a mile in) along the ridge, on singletrack. It’s a pretty good trail with great visibility of the surrounding area, and it sure was windy… 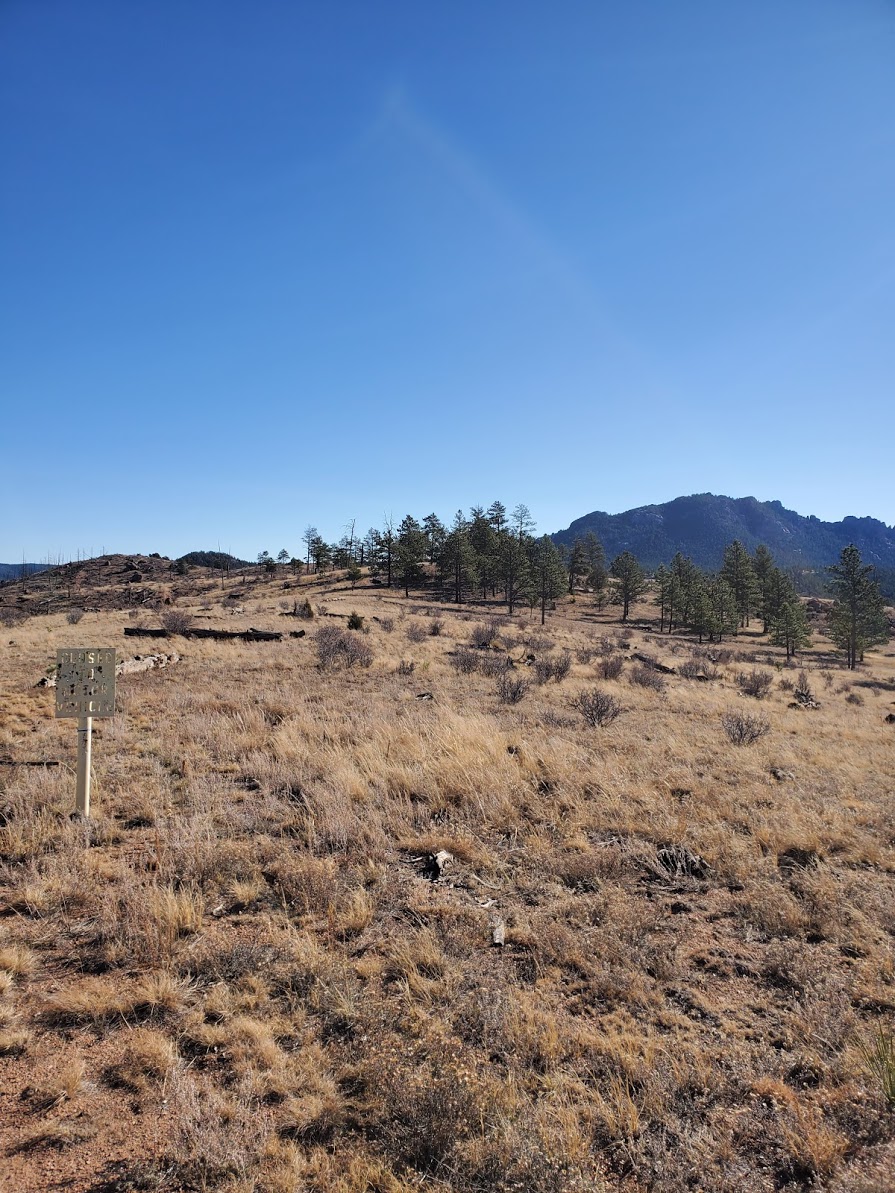 The CT Seg 2 junction is super close. I recall passing this unmarked singletrack when I hiked Chair Rocks, and wondered if there were good campsites around here. Where does one camp on this segment? 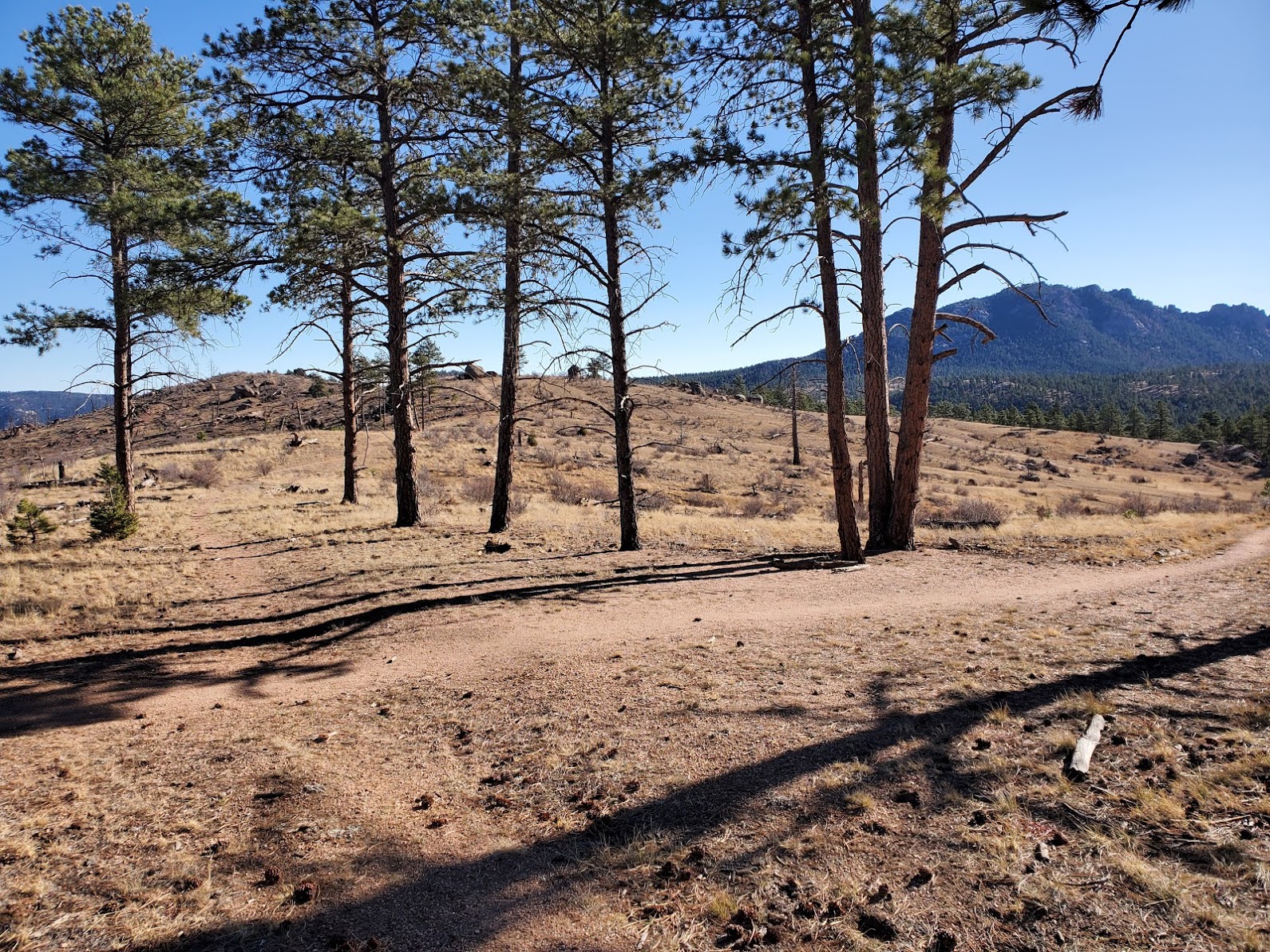 There’s a short descent into the wooded area, then you end up right on the fenceline for the ranch. It’s well-marked, so it’s very easy to avoid. 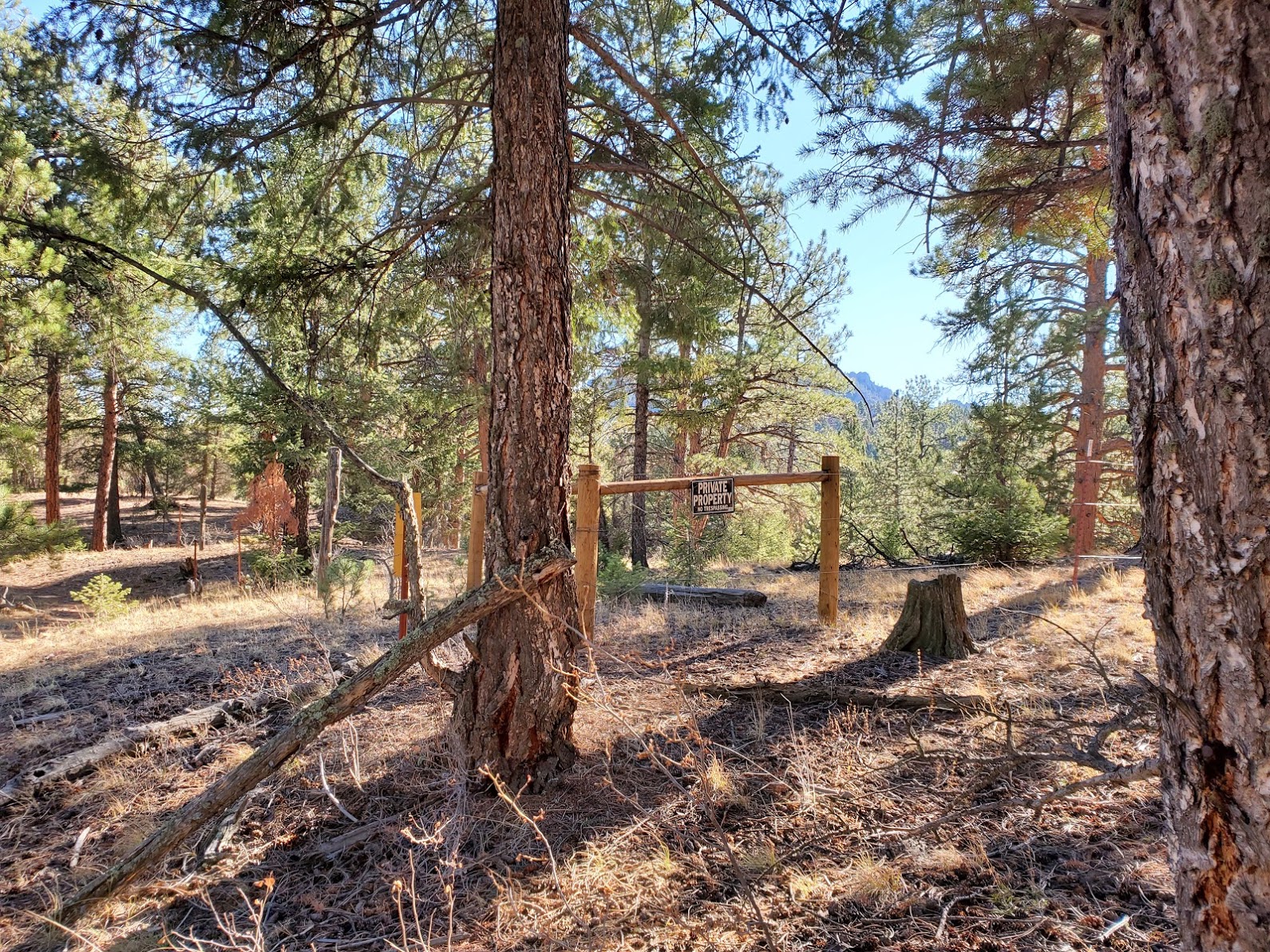 There’s a cadastral survey marker and old signage. The ranch owners carved a trail just to the north of the fenceline, which was a bit better to travel on the way in. On the way out, it was harder to follow and I overshot the turn-off by a few hundred feet. 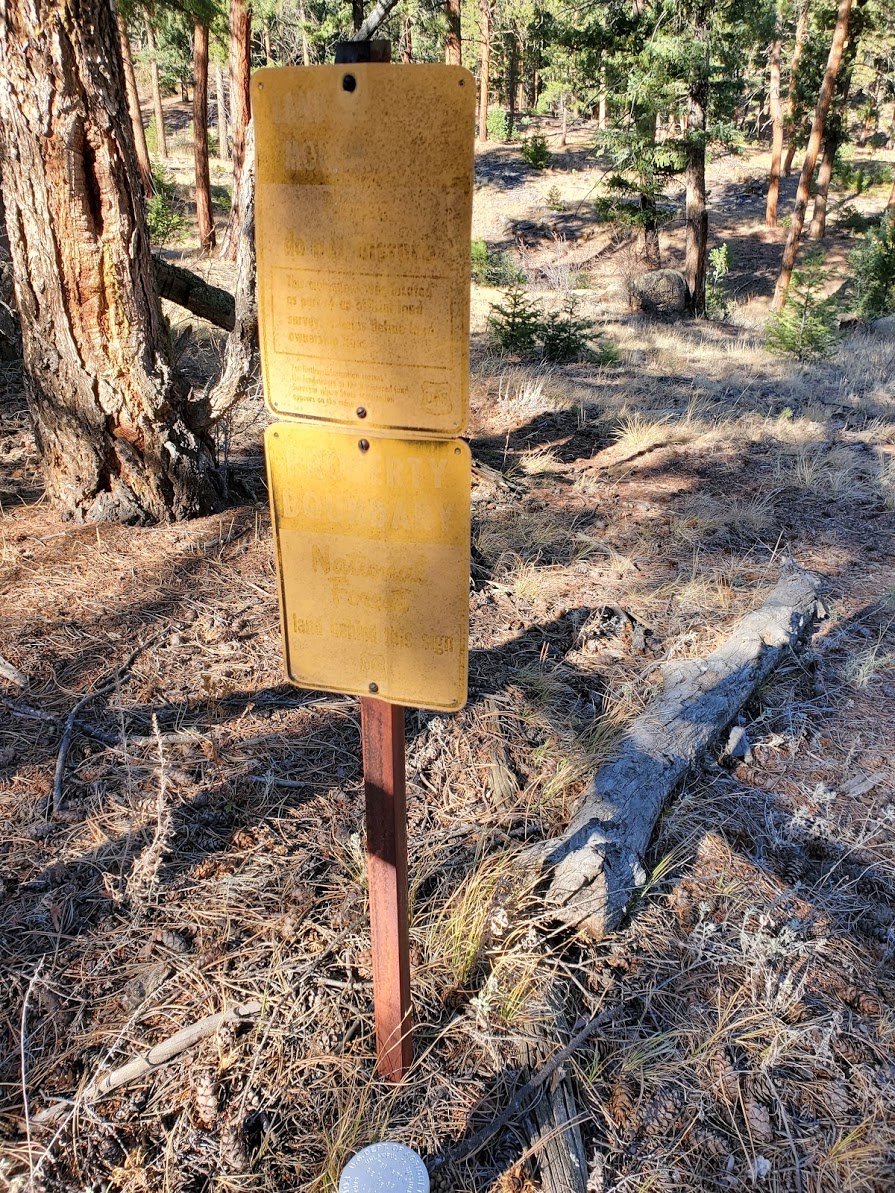 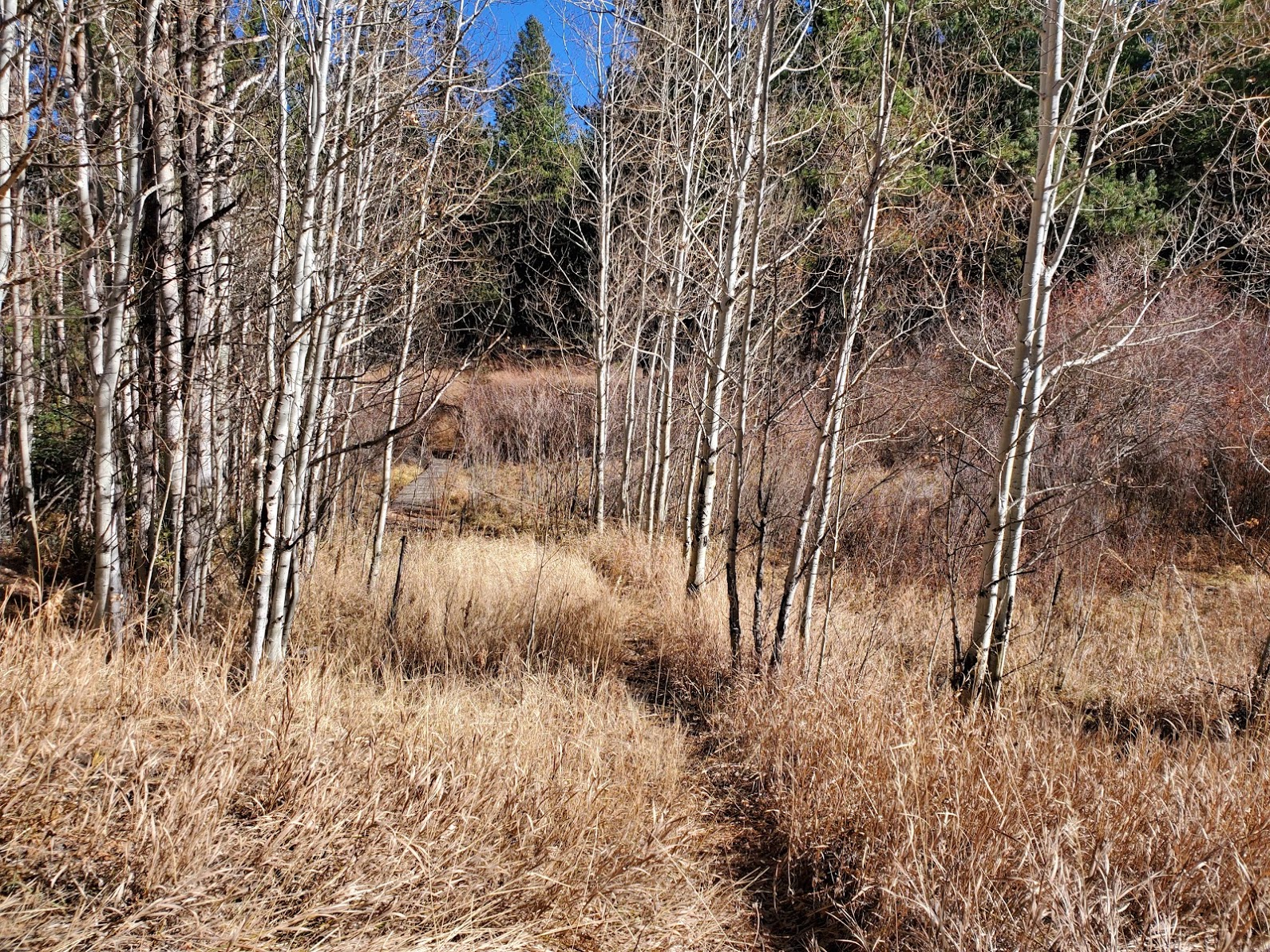 Eventually, I got to the famed boardwalk and crossed over, where I didn’t really see much in the way of trails, just a bunch of logs from the fuel mitigation activity. I found a good line up an old road (probably from the thinning) but I can’t get the pictures from Gaia, so you’ll just have to imagine it. 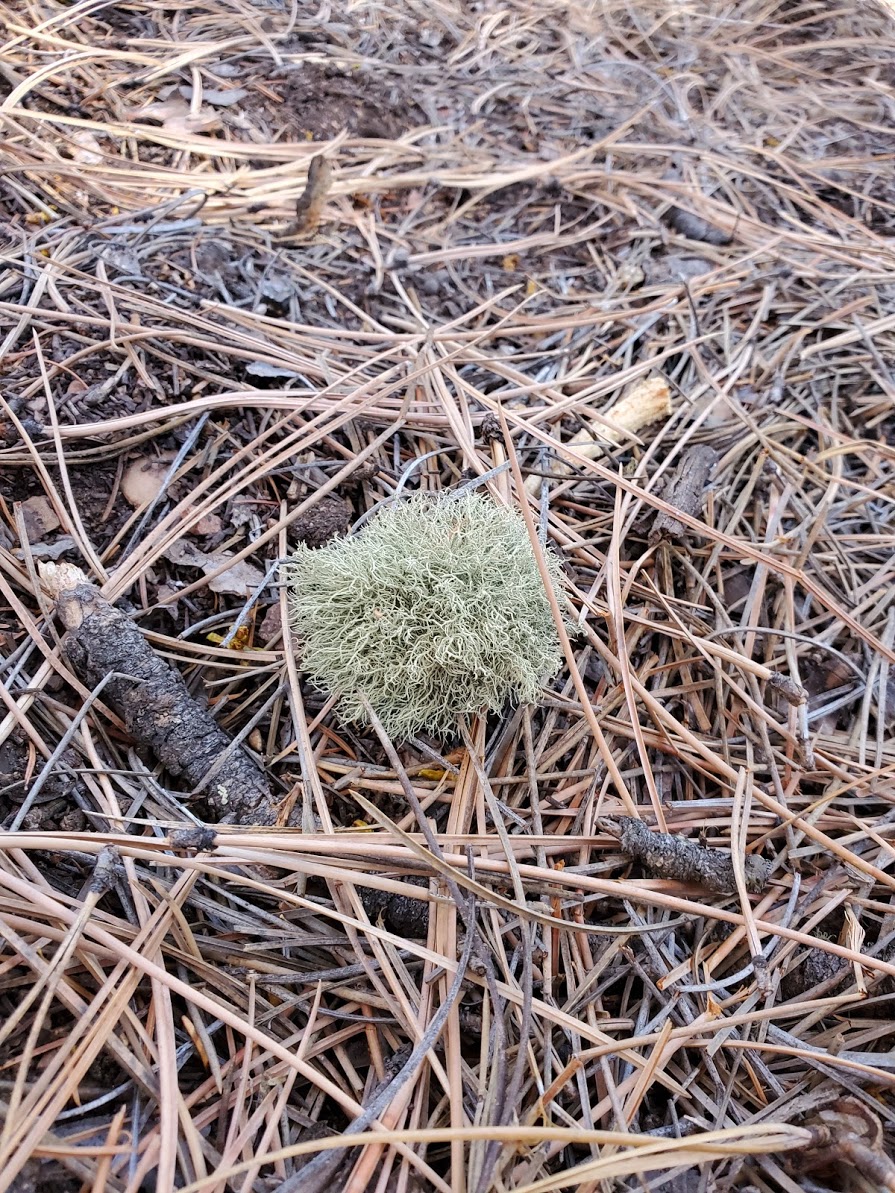 I found a forest marimo (moss ball) along the way. 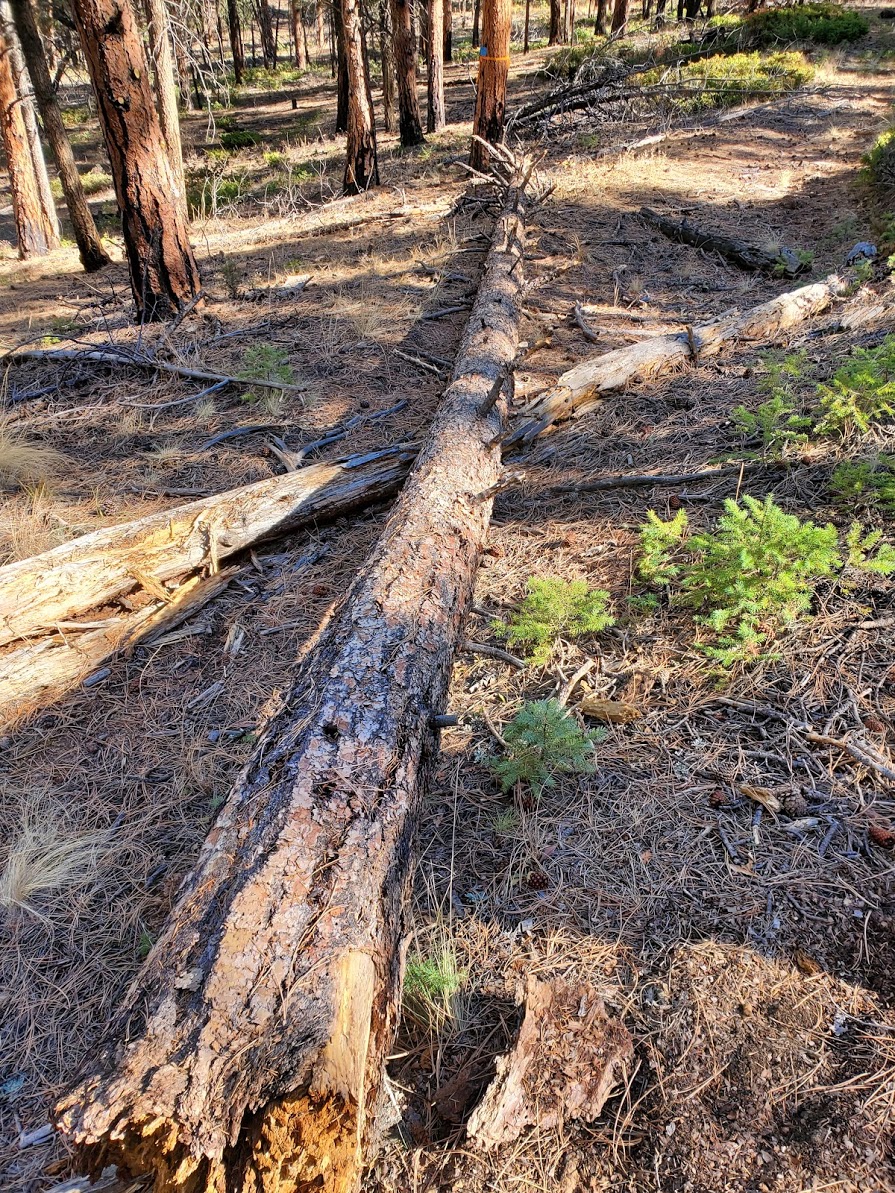 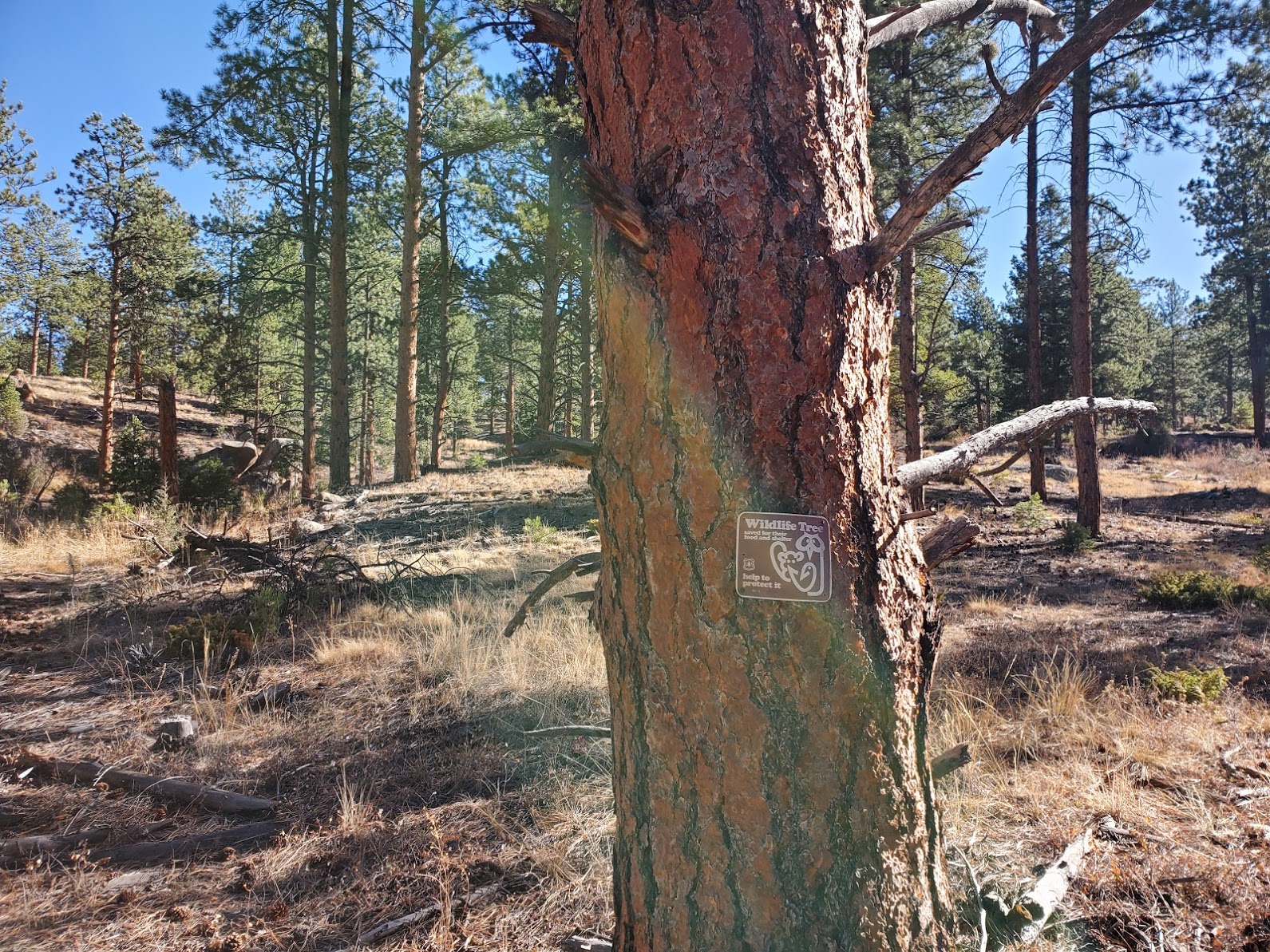 There was no one living in the wildy tree. It was kinda surreal traveling off-trail for the first time, you have to constantly check your heading and compare the landscape to your map. I tried to avoid looking at Gaia too often and instead orient myself based on compass heading, knowing I would intersect the other forest road eventually.

I did eventually hit the FS road (not too far from the wildy tree) and made my way south towards the base. There’s a turnoff into another logging area, and that’s where the social trail begins. It’s well-marked with white rock cairns and marking tape, and it’s pretty easy to follow…navigation-wise, anyway. It was real steep. 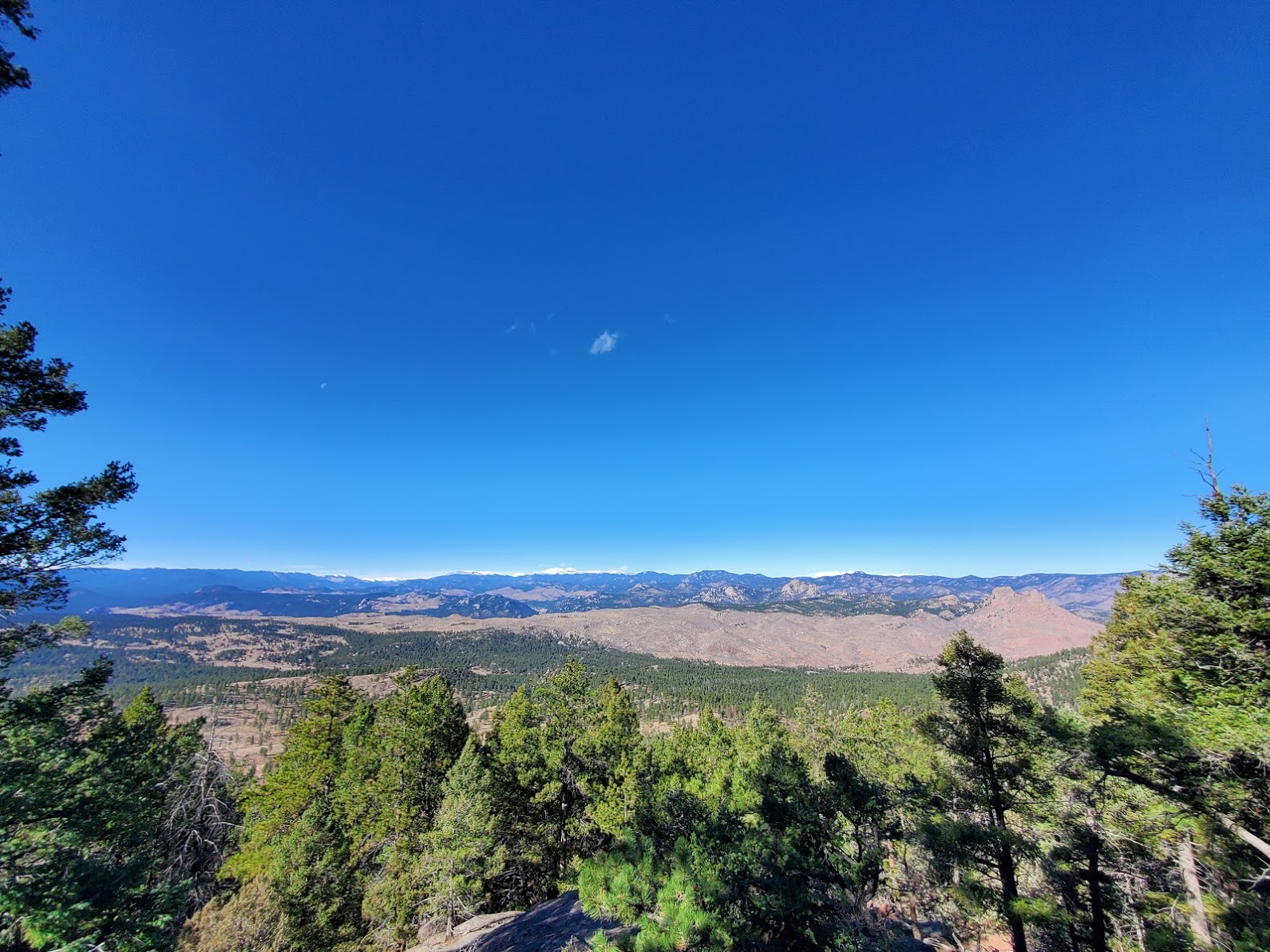 Towards the top, I stopped to look out west. It was a gorgeous, windy day and super clear! 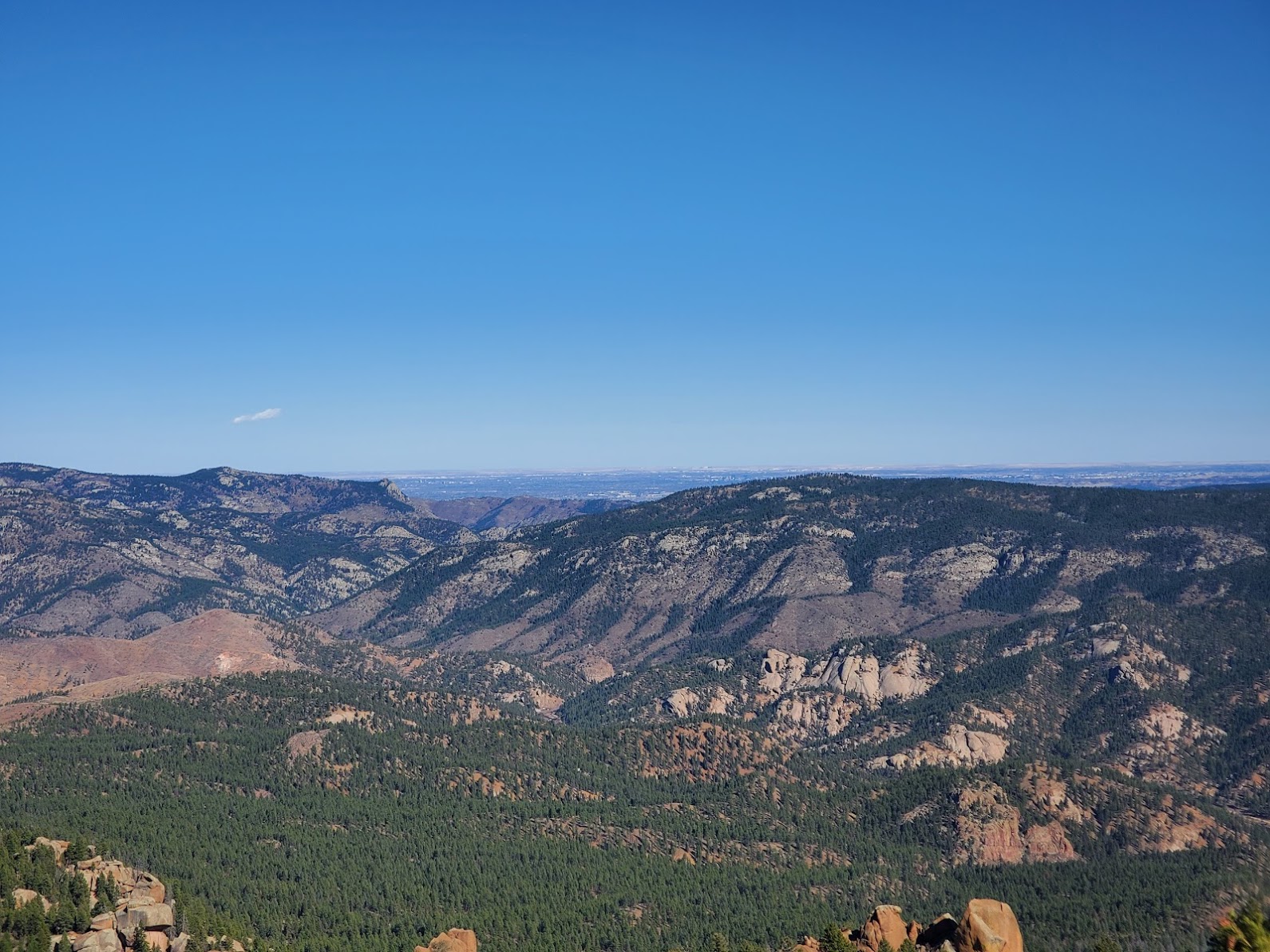 I didn’t quite make it to the summit, but I got pretty close and stopped for a PB&J and snacks, sent some photos, and then headed down. I slipped and fell on the way down (re: steep) but it wasn’t serious and I only bruised my hip a bit. Hiking back through the forest off-trail was easier than hiking in, and I felt much more confident. There’s always a bit of nervousness & fear in the unknown, so it’s good to push through it when you can.

I got back to the car around 2 and made my way home, worn out and feeling accomplished from the day’s hike. I’m not sure if I’ll hike Long Scraggy again anytime soon, but every time I see it in the distance I get a huge smile from knowing I’ve been on yet another peak I can see from my house!