Nowhere else to be

And at this point, nowhere I’d rather be. This post is basically a quick recap of all my trips over Our Pandemic Summer. Almost everyone wore a mask. I’m really proud of myself for spending so much time outside and challenging myself in ways I really hadn’t before. Hiking & going outside was easily the best gift to myself in this absolute bullshit dumpster fire of a year.

I spent 6 nights outside this summer, which is an increase of 6 from last year. Let’s see…

Deer Creek Canyon is easily my favorite go-to hike. Until this summer, I had never made it up to Plymouth Mountain, its main attraction and peak. This was my first actual hike of the season, although it was technically late spring. I would come back to Deer Creek a handful more times, and it was extremely fulfilling to compare this trip to later ones. 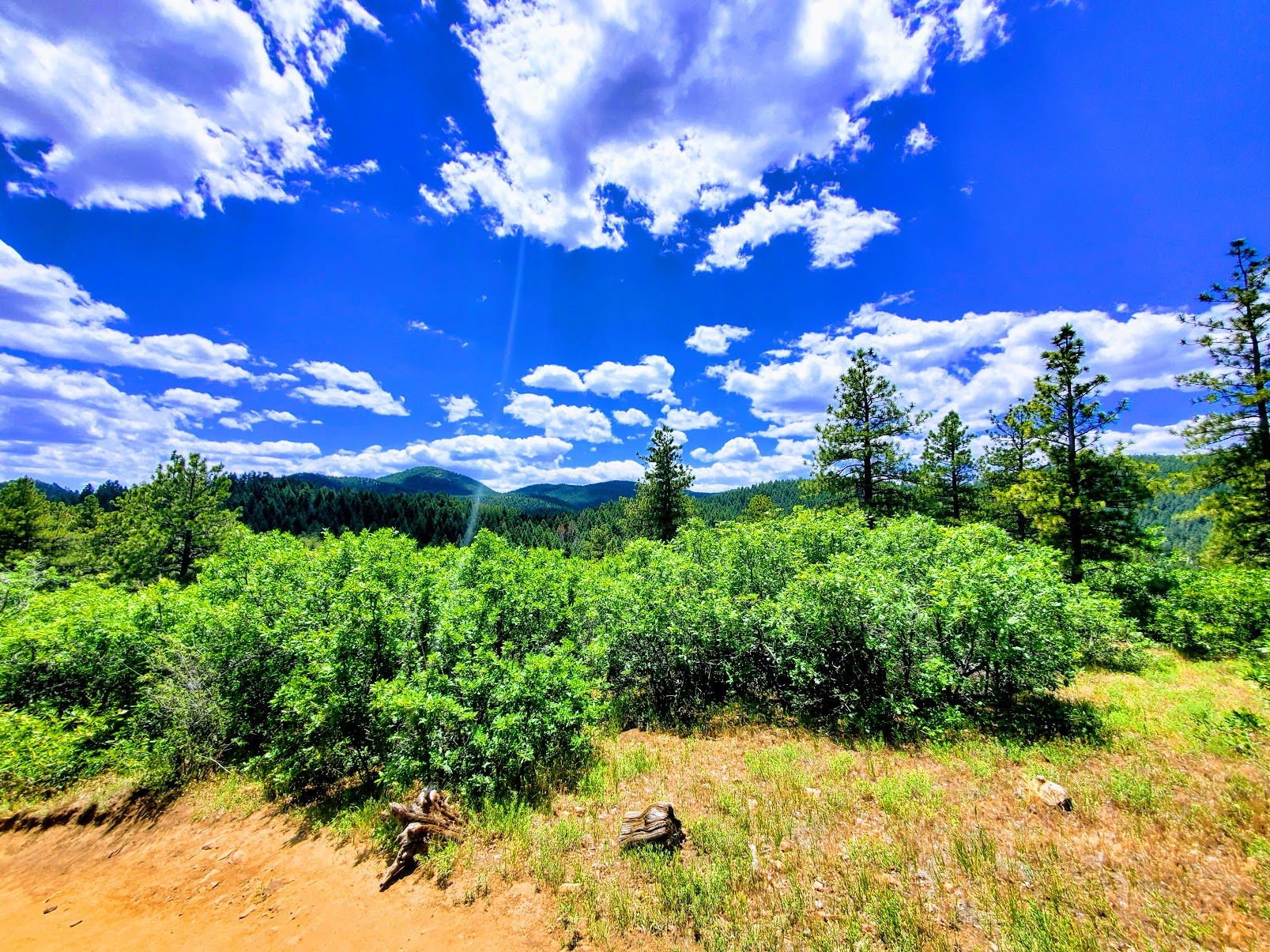 A short and sweet (and fairly vertical) hike just outside of Mt Evans, offering amazing views of the area. I met an older lady solo hiker and her sweet pup at the summit, we chatted about various mountain-related things. I remember she said, “I woke up today and felt like, I just gotta get up Chief.” I related, and I hope to be hiking happy at her age. I also hiked Mt Mistanta (formerly Squaw Peak) immediately after and got to check out the fire lookout. 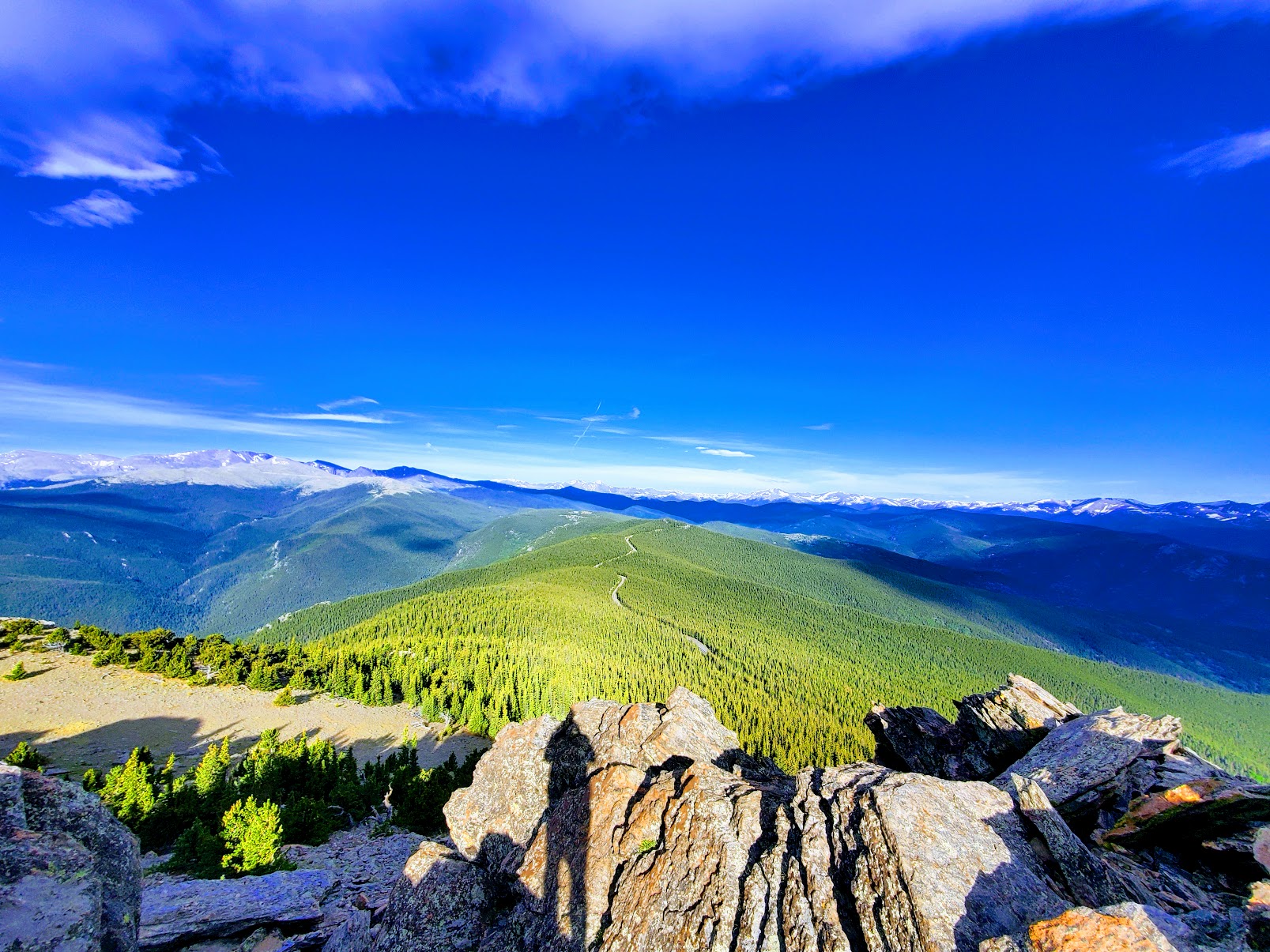 2 nights, in a USFS campground. My first time camping since a solo roadtrip a decade ago. I spent a day hiking along Segment 6 of the Colorado Trail and an adjacent trail. It really kicked off my adventurous summer. A 13-mile loop where I learned the importance of electrolytes. 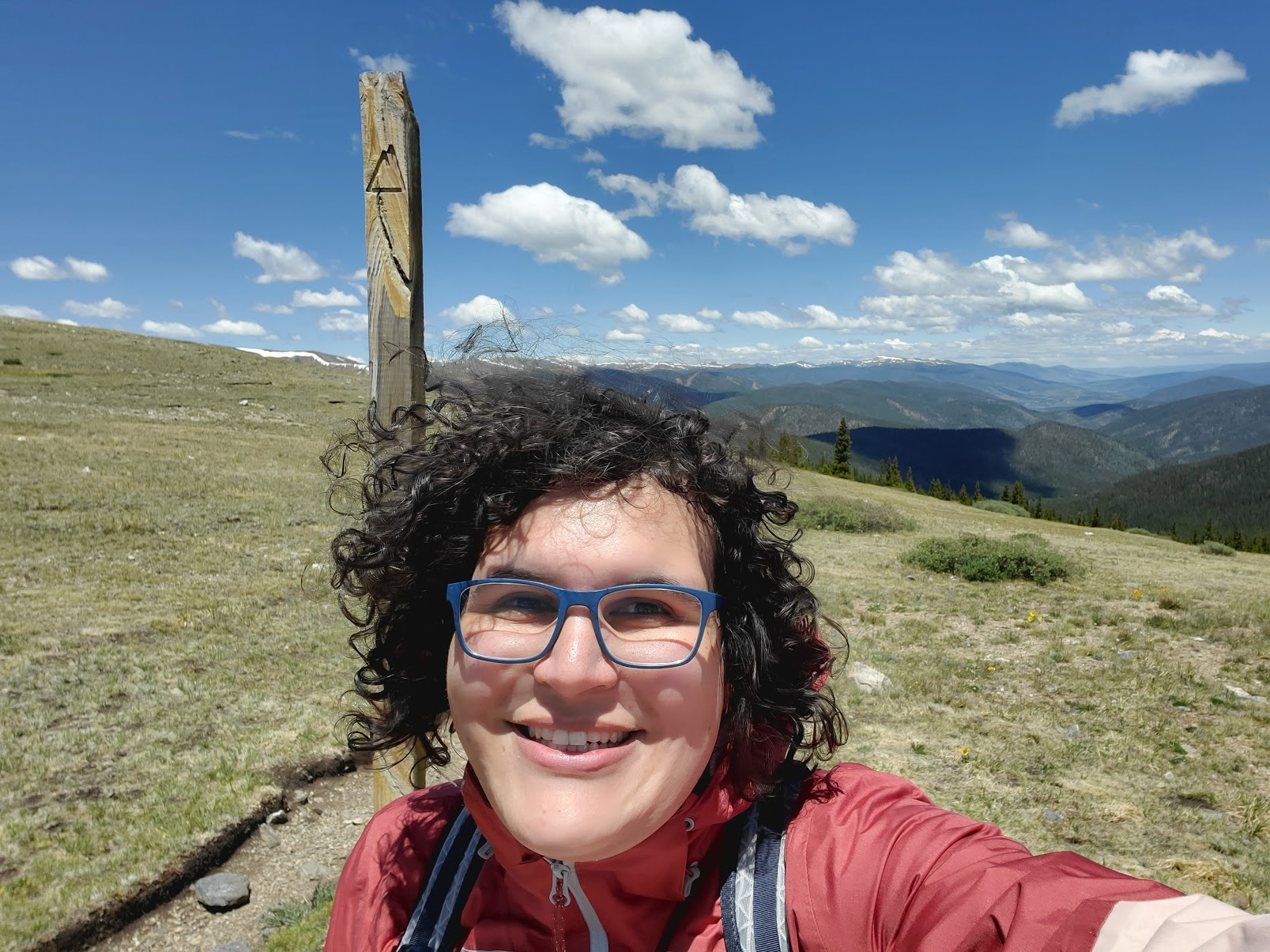 Remember last summer when I did a big bike ride around Chatfield? I fucking did it again, but this time tacked on some extra miles by riding some singletrack in Hildebrand Ranch Park. On a touring bike. It was a stupid idea, but also a good way to find just what the limits are. Still, it was basically the same route and on the same day as the previous year. 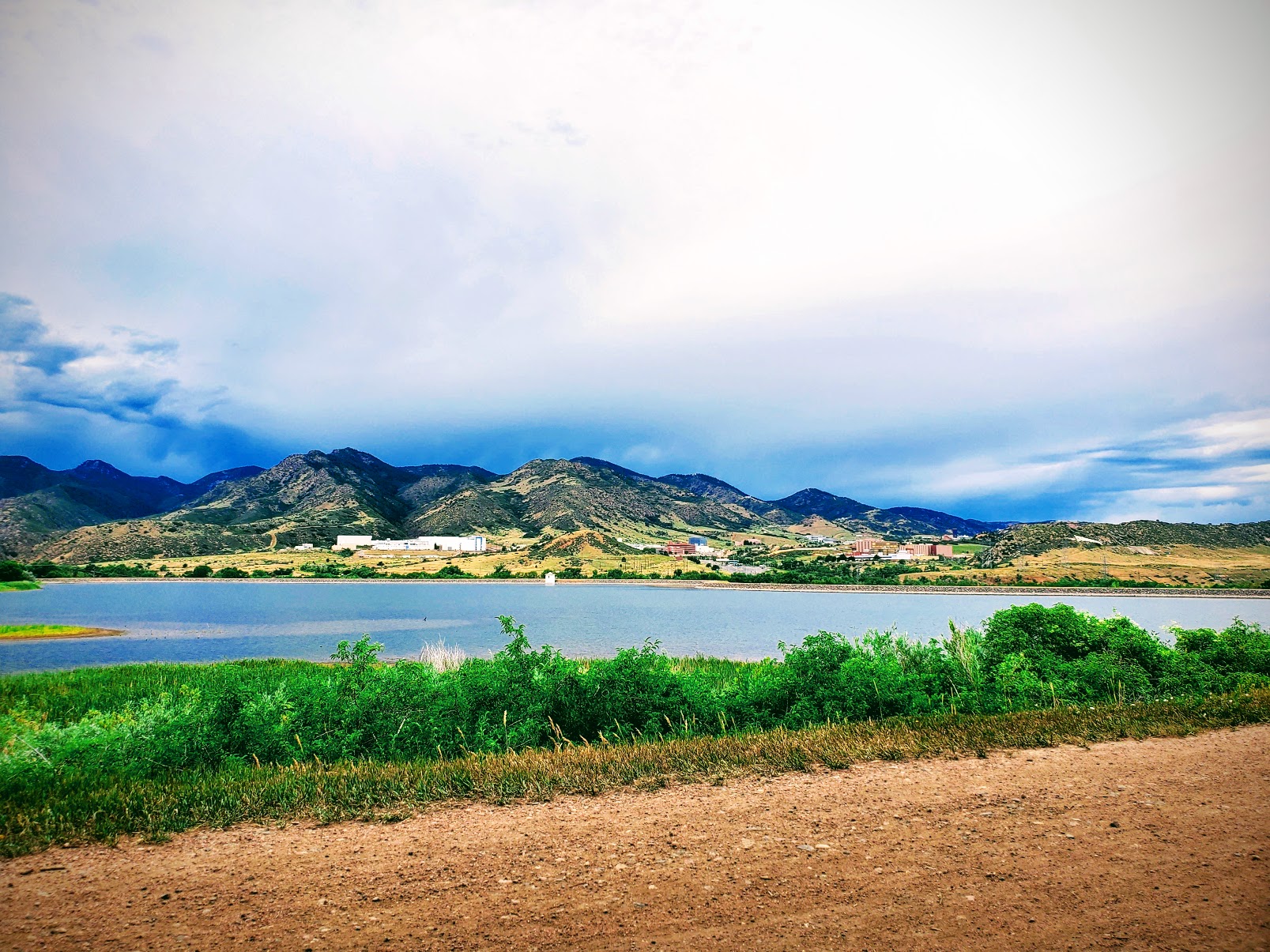 Having immediately tired of the noise and smells of the traditional USFS campground, I decided to finally try dispersed camping. I had originally planned to do some gravel biking around Winter Park, but as I went to scout up the road, my chain broke. Better a quarter mile from my campsite than ten miles. I ended up doing an 8-mile hike up towards the Vasquez Peak Wildy and heading home after a single night instead. I’d like to go back, for sure. 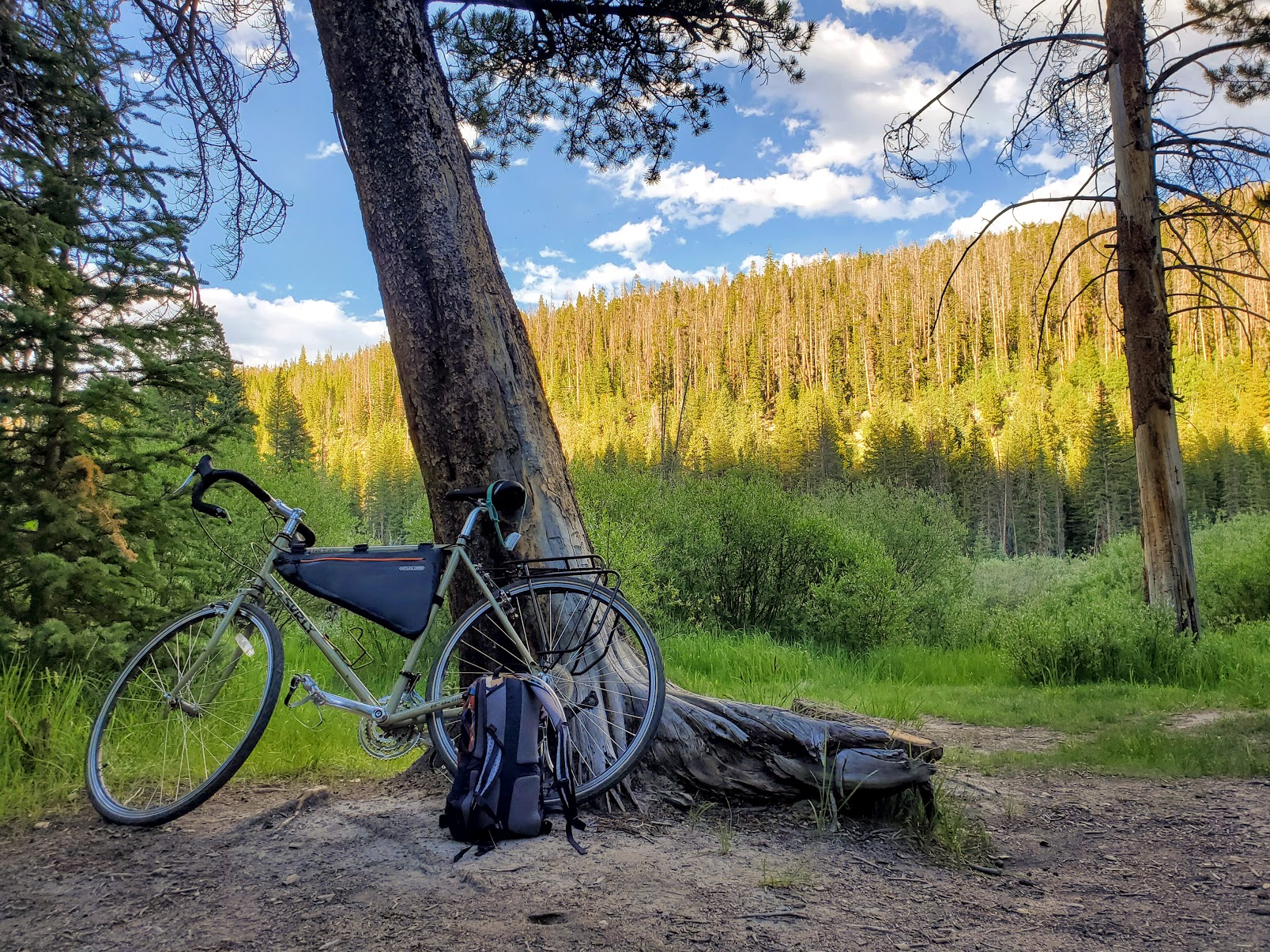 Having done Waterton Canyon two years ago, I wondered what was on the southern side. Indian Creek, it turns out - the other connection to the Colorado Trail Segment 1. This is a real sweet hideaway, right at the edge of the Pike National Forest. Within 10 days, I hiked it 3 times: 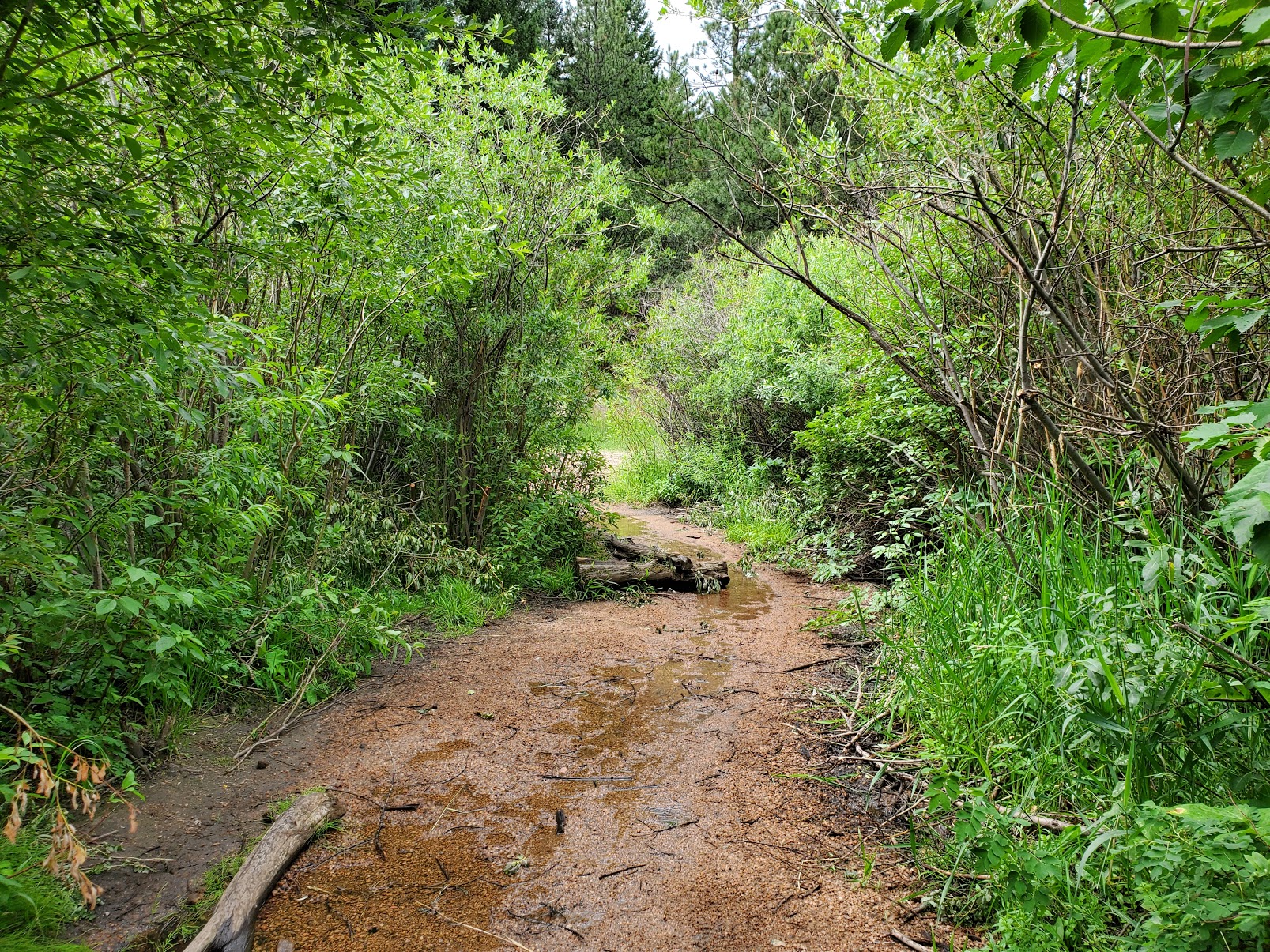 I grew up in Fort Collins, but spent very little time in the Poudre Canyon. Dad and I went XC skiing & camping a few times, but I hardly remember that. This big bike trip let me really take in what Northen Colorado has to offer. I rode from Cameron Pass down to Rand, then up to Walden, stayed the night at the reservoir, and then rode back up to Cameron Pass the next day.

It was mental, I did a huge write-up on Google Photos which I should convert to an actual post, because this was a transformational trip. In every trip I had done up to this point, there was always some easy way to bail out. My car was never more than a few miles away, always waiting at the trailhead. This time, I was 30 miles and 2,000 vertical feet away. I had everything I needed with me, but there was no easy escape. I did it, I powered through, it was the hardest bike ride I’ve experienced, and I’m better for having done it.

Also it was a full moon and the geese would. not. shut. up. All night. Fucking geese. 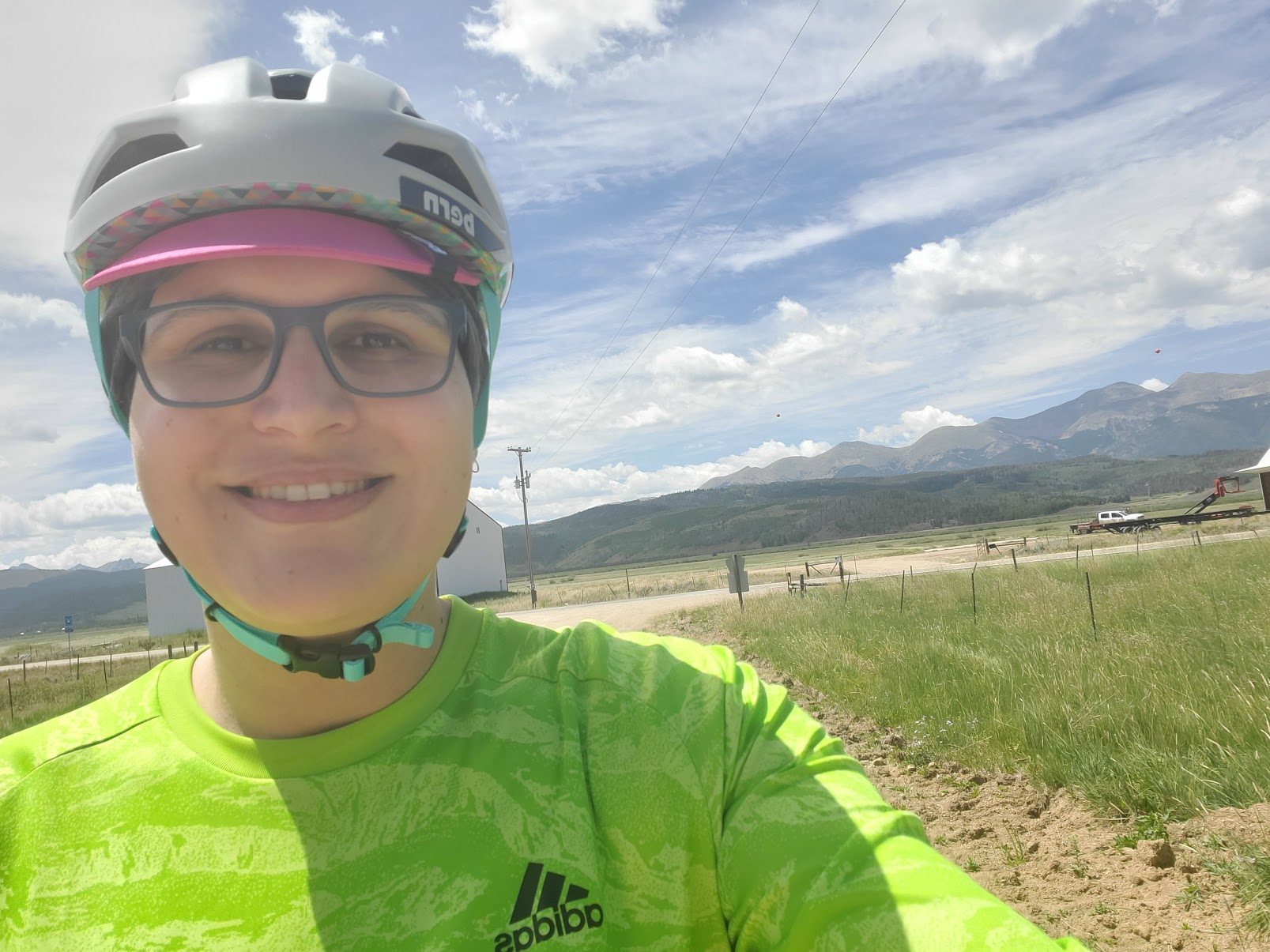 This was notable just because I had never hiked in a burn area before. Forest ecologies are amazing. Fire absolutely transforms the land. There were downed trees everywhere, and yet it was anything but dead. You could easily read where the fire had burned most intense versus more mild areas, with some areas seemingly untouched. I remember the forest floor seeming so clean in an area with healthy trees, then walking out to the scene below. 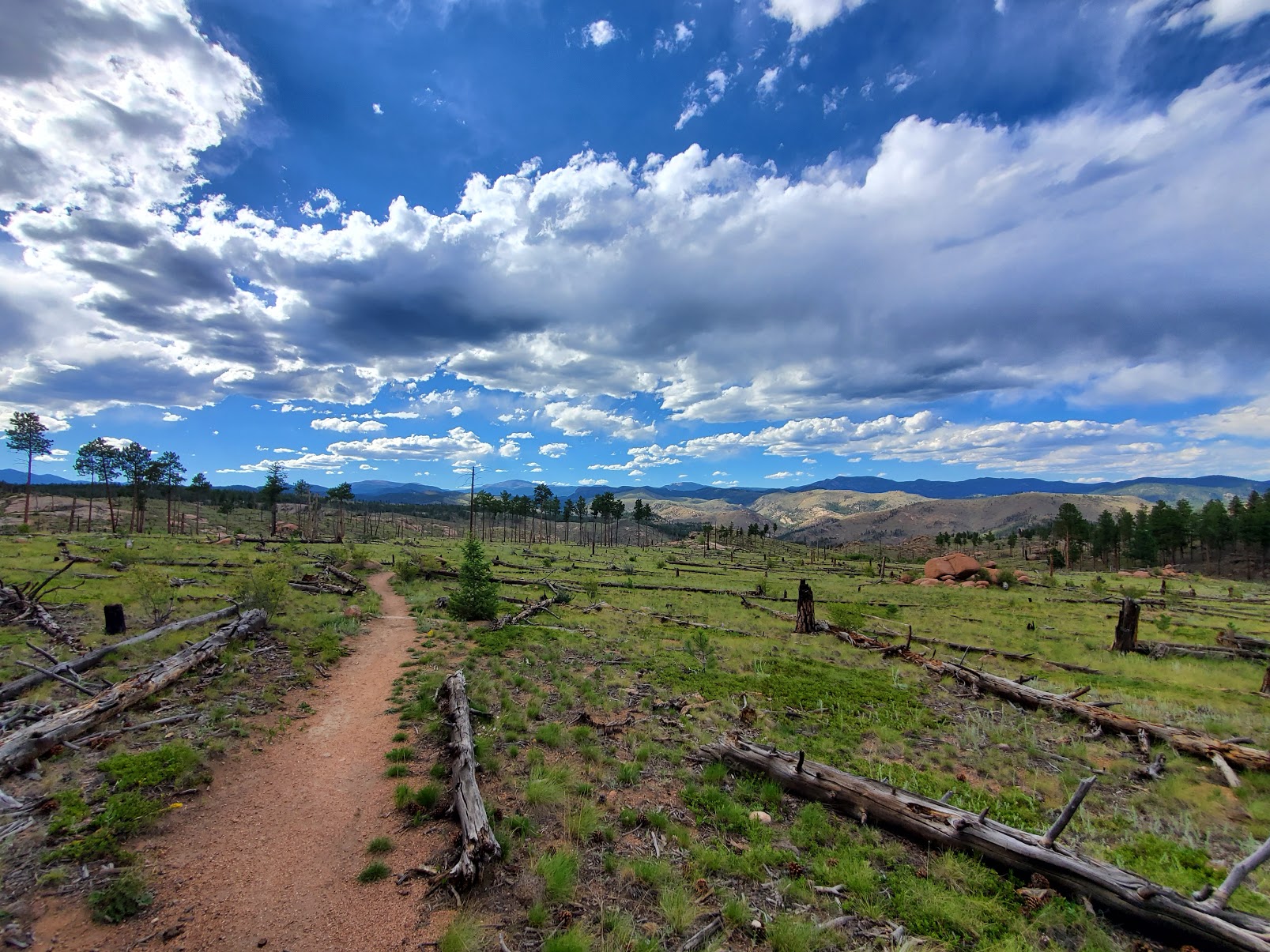 A few days before my first backpacking trip, I convinced Dad to join me on a shakedown hike. I packed everything I would take with me, and we made our way up Chief Mountain since it’s a known quantity. We spent some time at the summit enjoying fresh coffee & chatting - it was a perfect start to the day. My pack fit great, too! 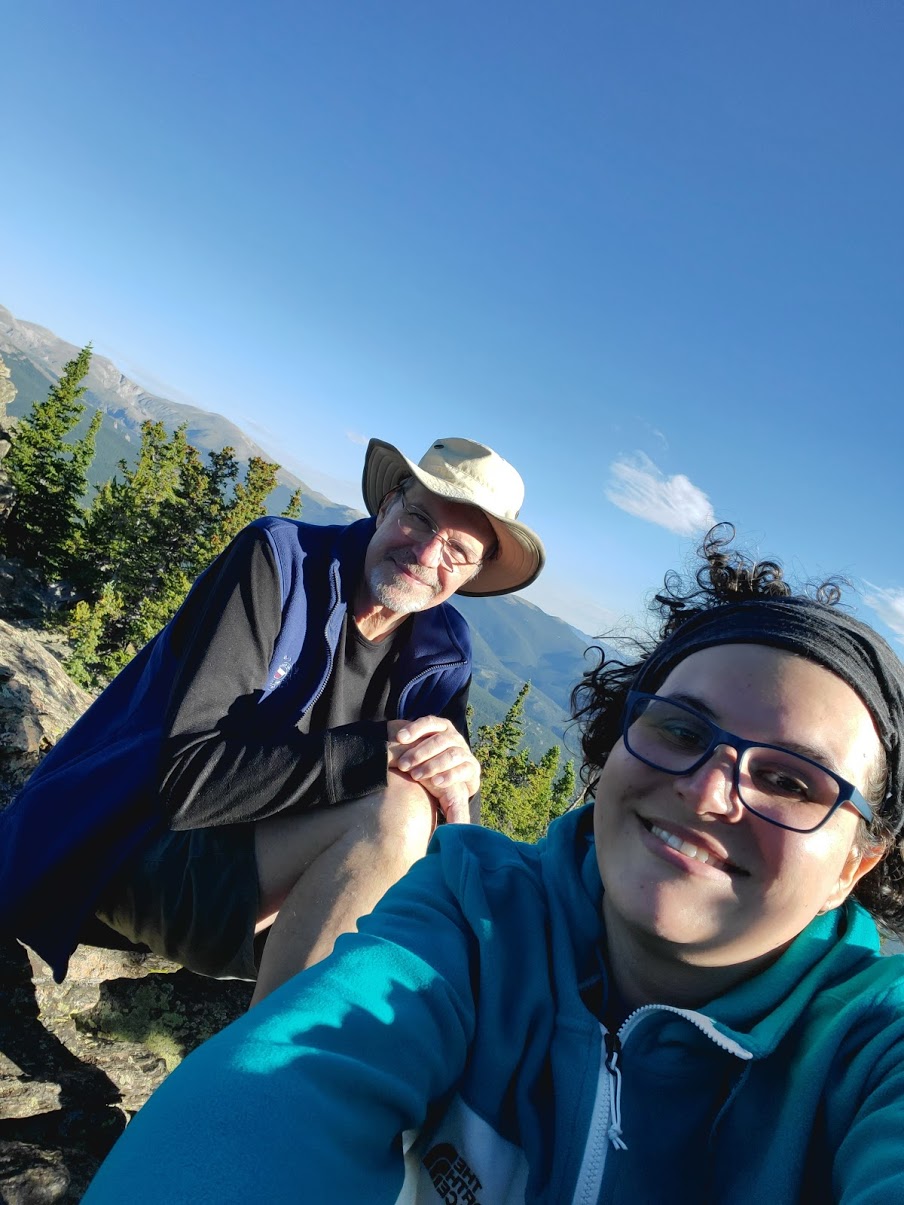 First-time backpacking, solo, with a nearby fire

The James Peak Wilderness is a real treasure. I had hiked up that way several years ago. Shakedown complete and feeling confident in my hiking skills and Good Enough at camping, I decided to spend a few nights up there. My original route was something like 16 miles, enough to easily cover in 3 days…but there was a nearby wildfire making me nervous and generating tons of smoke. After a late start to my 2nd day, I decided to cut it short and just enjoyed the long hike. I did finally get to see the Needle’s Eye tunnel on the Moffat Road, which was pretty impressive. Not a bad start to backpacking, but probably not ideal. 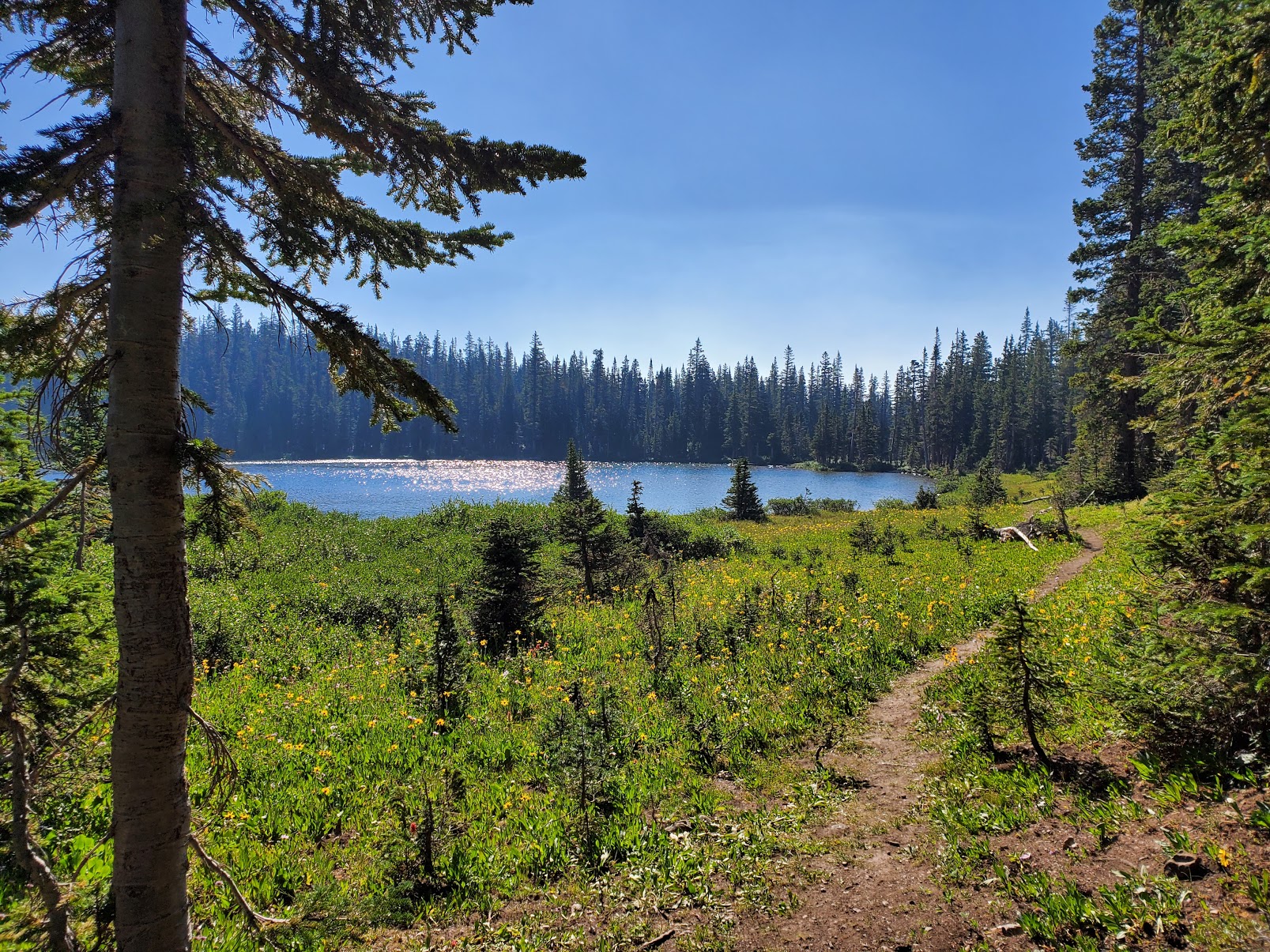 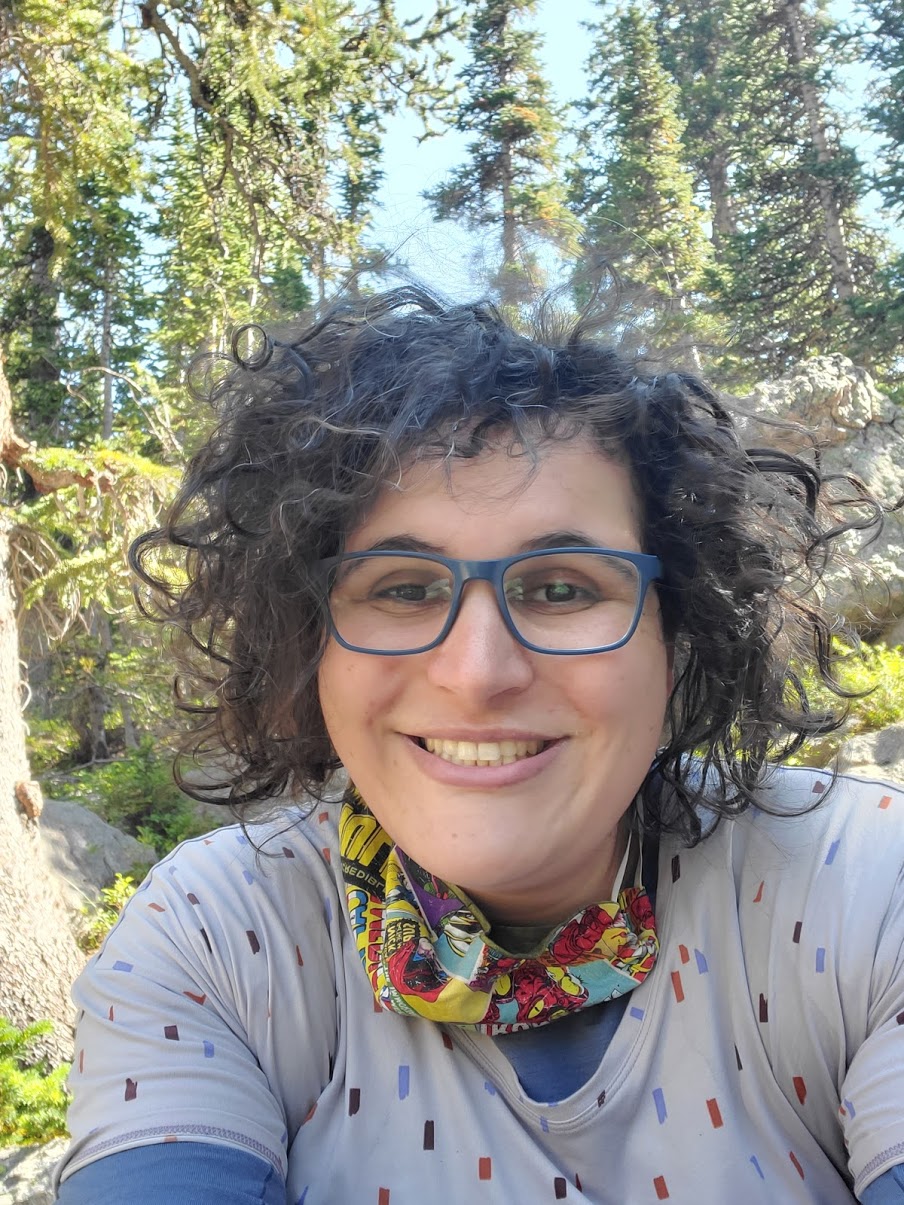 Bonus pic of me feeling accomplished from having done something completely new.

My first trip to the Lost Creek Wilderness. What a spectacular place, just about 50 minutes from home. This was a long (13 mile) steep (+3000ft) smokey hike. It ended at a saddle, above treeline…but the smoke was so thick, I couldn’t see out to South Park. It did make me fall in love with the Lost Creek wildy, though. Amazingly, this area was totally different than the area 20 miles to the south where I’d backpack a bit later. 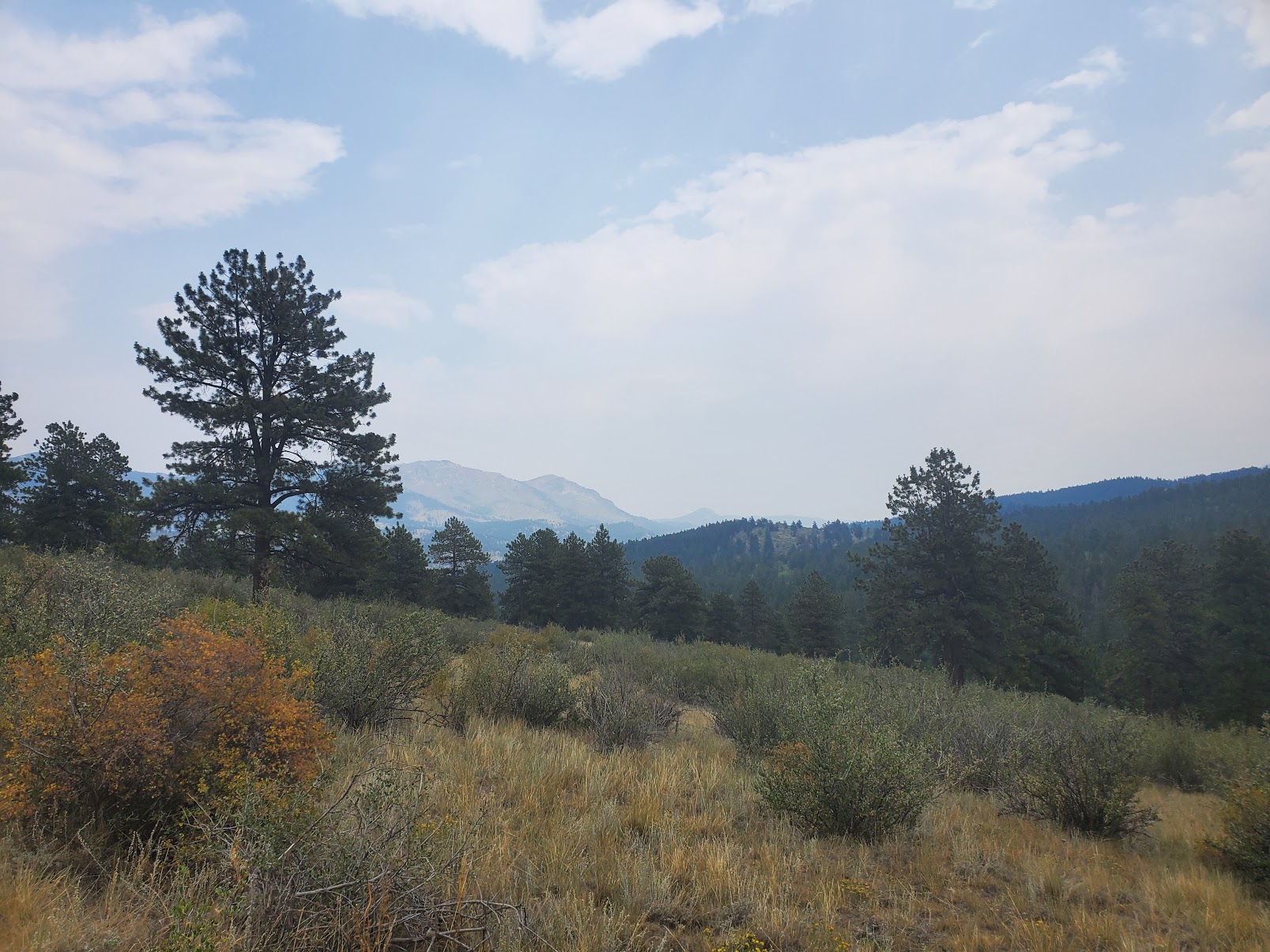 Remember how I love Deer Creek? I went back. In the dark. This was my first sunriser, and I was up at 4:30 or something dumb like that, to go hike Plymouth and watch the sun come up. It was rad. 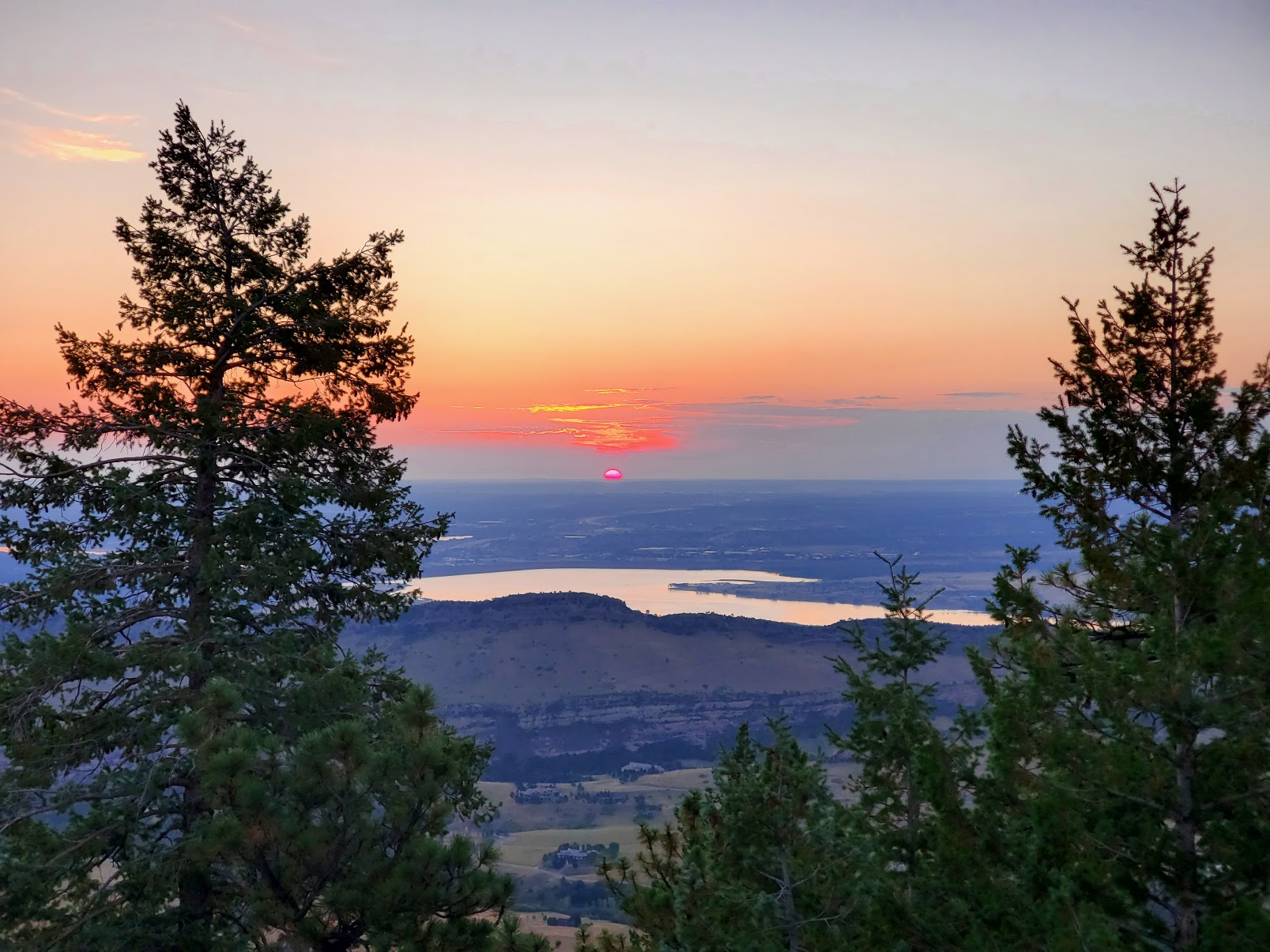 It was SO RAD I did it again the next week, because why not? This time was a full moon approach, which was really cool. I was able to keep my headlamp off for a good portion of the hike, in fact. 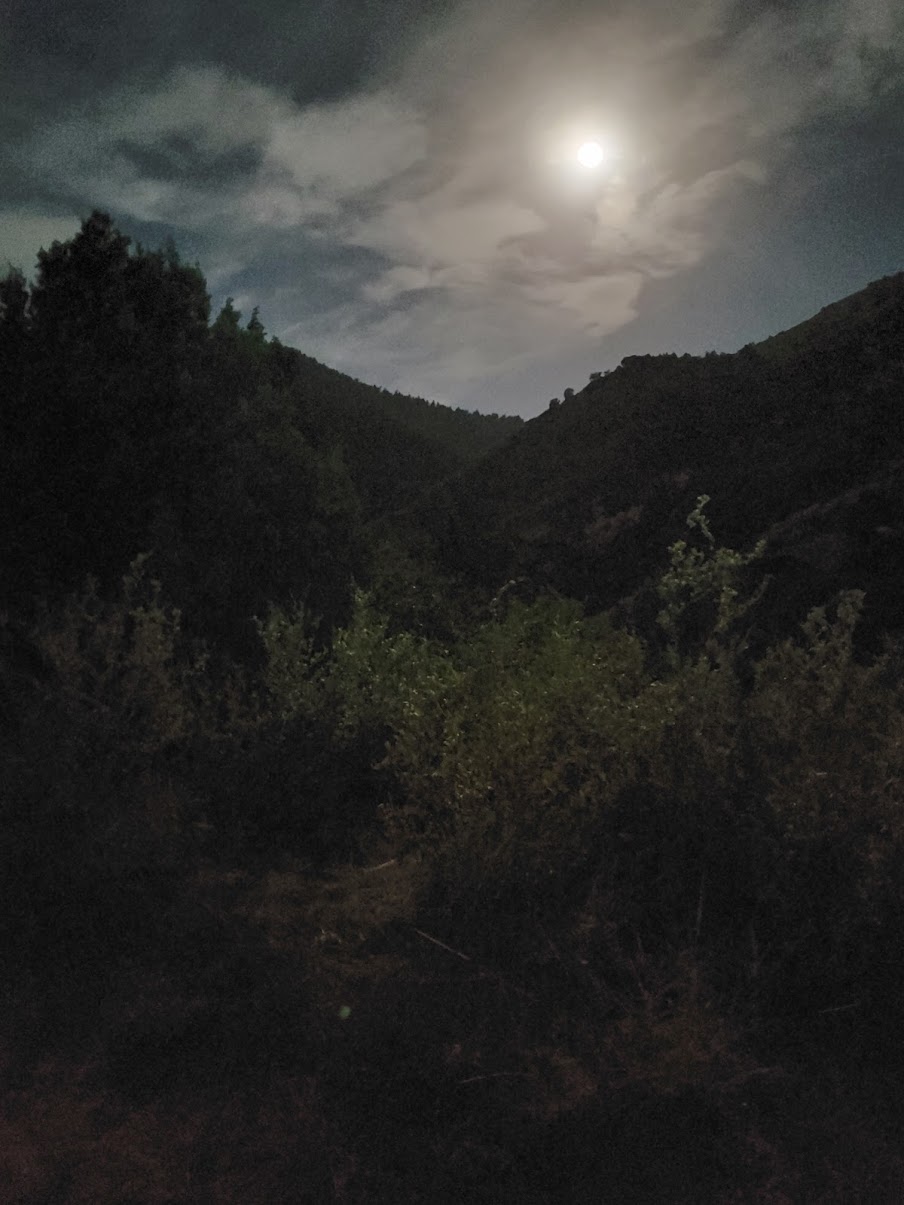 My first camping/backpacking trip with a friend! Andy, his sweet pup Athena, and I headed off to the Lost Creek wildy again. We met a ton of friendly trail folk and got real, real tired after hiking 8 miles in the heat. We ended our long-ass day at a sketchy water source where I ate half an edible, stared at aspen and rocks, and promptly conked out for my best wilderness sleep ever. 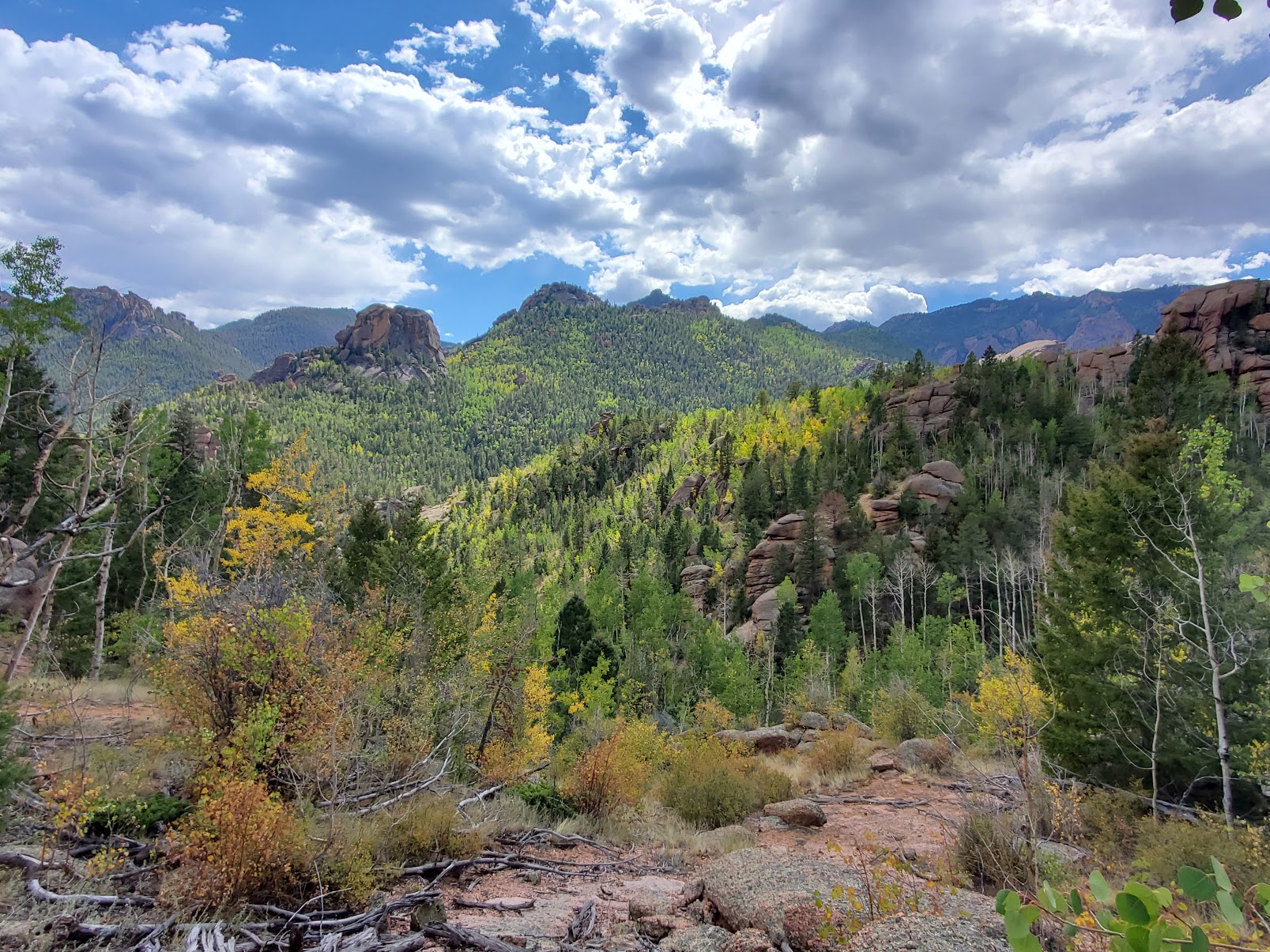 It was really really hard to just pick 2 photos for this trip. Lost Creek is the kind of place where you’re like, this is real? and it’s free? you can just walk up in here like whatever? 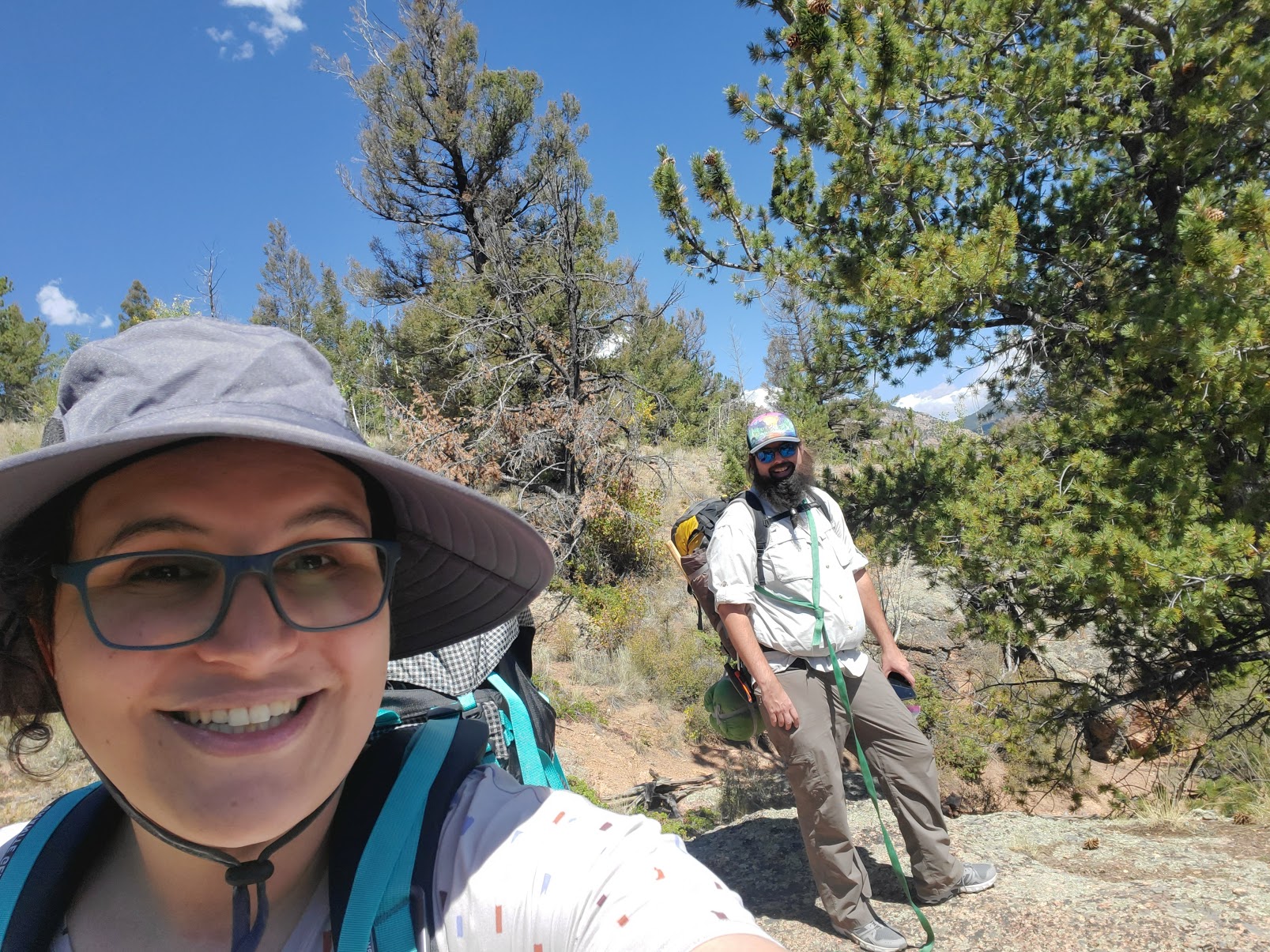 Technically I picked 3; the header image is from Lost Creek as well. Excited to go back.

I bought a CPW parks pass. I could finally check out Roxborough, a hiker-only state park a mere 30 minutes from the house and a few miles from Indian Creek. The foothills of Denver are way different than Fort Collins, but the hogbacks stretch the entire length of the Rockies - so that’s pretty cool. A real gem of a park, no dog poop, no bikers, and not even a lot of foot traffic! I’ve done Roxborough twice this season, once when it had snowed (in September, Colorado lol) and another time when it rained on my descent. 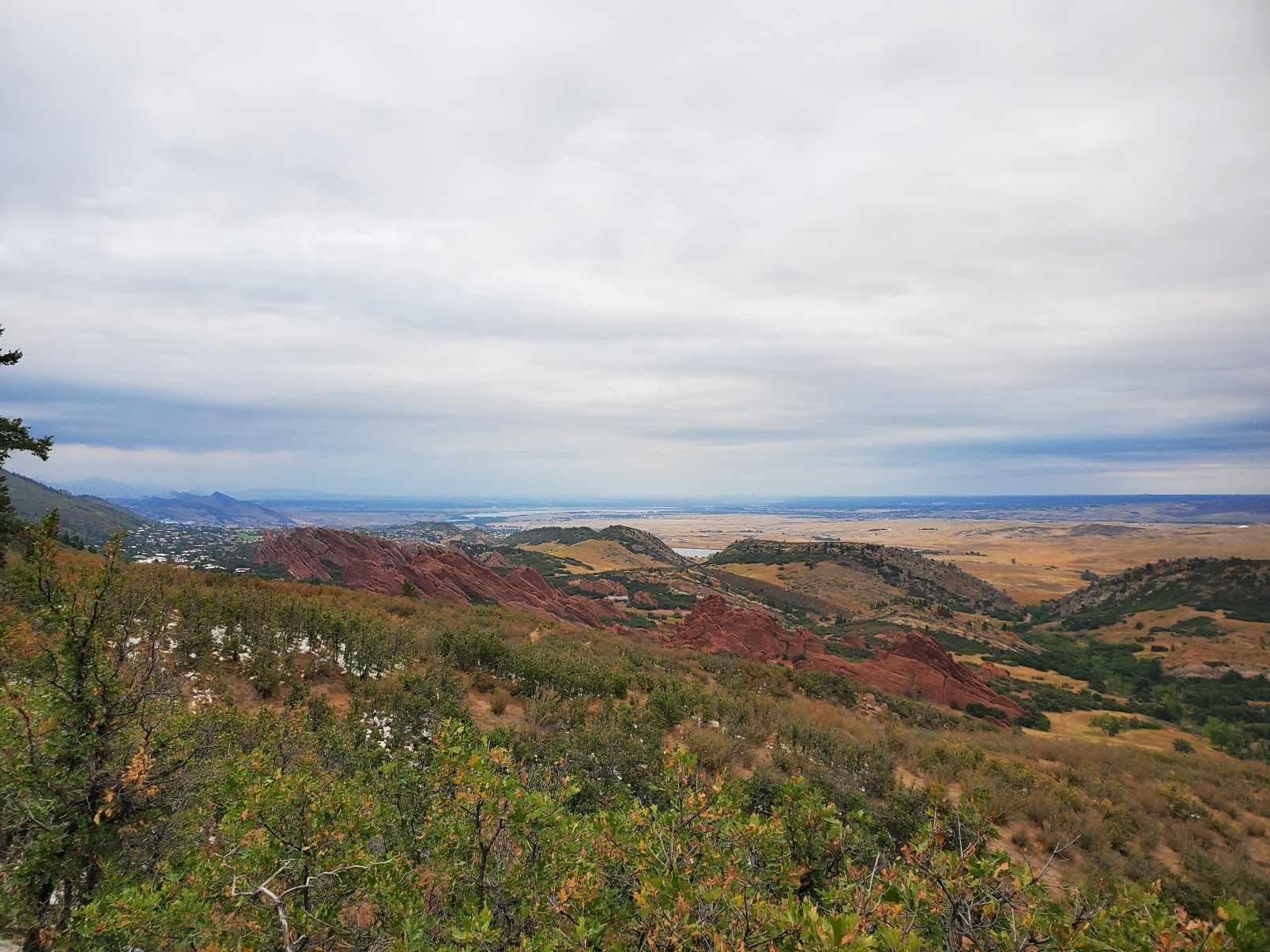 Another fantastic state park. I took a Tuesday off to day hike, check out a neat waterfall, and stand on top of a giant rock I had seen from US-285. I can’t recommend Staunton enough, it’s new, well-maintained, and just gorgeous. Colorado really gives a shit about its state parks, and Staunton is easily among the best of ‘em. Also, it was a donation from Frances Staunton, so the history is really neat as well! 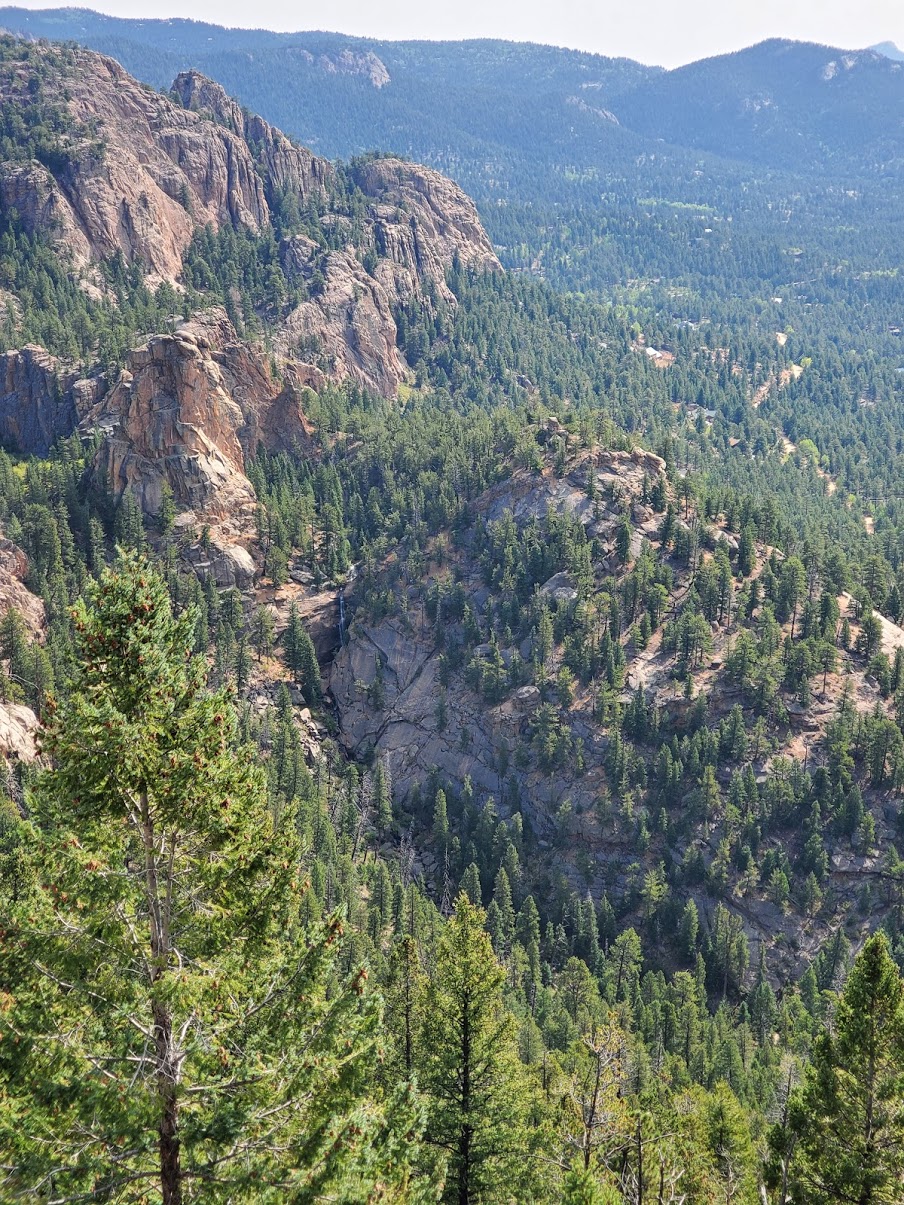 Right here at the end of the season, as the aspen turn gold and the license plates on Mt Evans Road turn Texan, I did some non-solo hiking. Weird. But my friend Taylor and her boy Colin were all about some leaf peeping, so we deided to check out Hell’s Hole in the Mt Evans Wilderness. This was a nice 8 or 9 mile out-n-back through an aspen grove, regular montane, then alpine willow ending in a glacial cirque. It was really unique and very pretty all around. I’d like to go back and do some off-trail hiking along the peaks surrounding the valley. I’m also happy that I’ve found more friends to hike with! 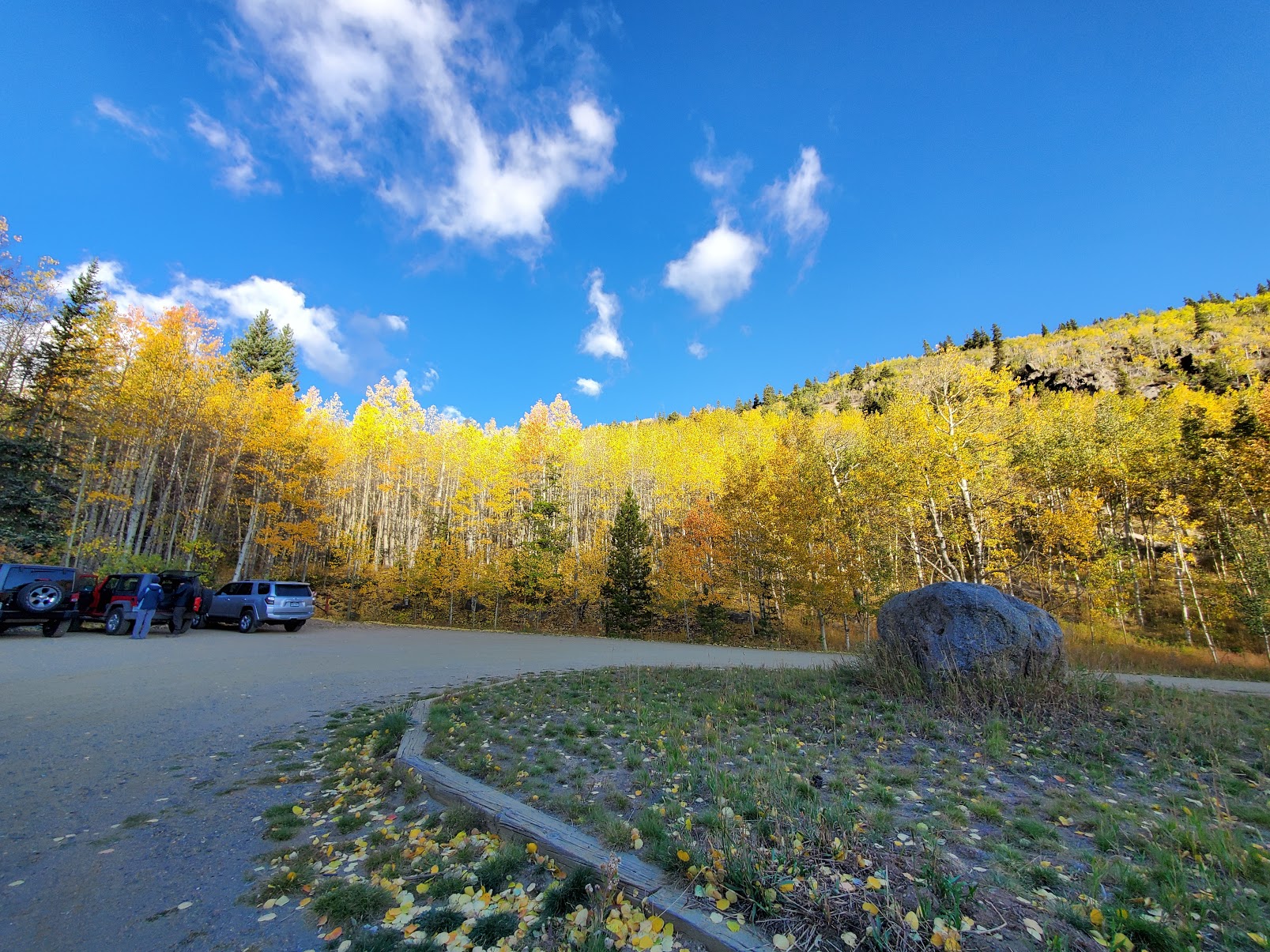 I’ll keep hiking into the winter, fall, and spring. So long as there isn’t too much snow, unless I feel like investing in snowshoes or XC skis. Which I might. Gotta make use of that 4Motion, otherwise what’s the point? 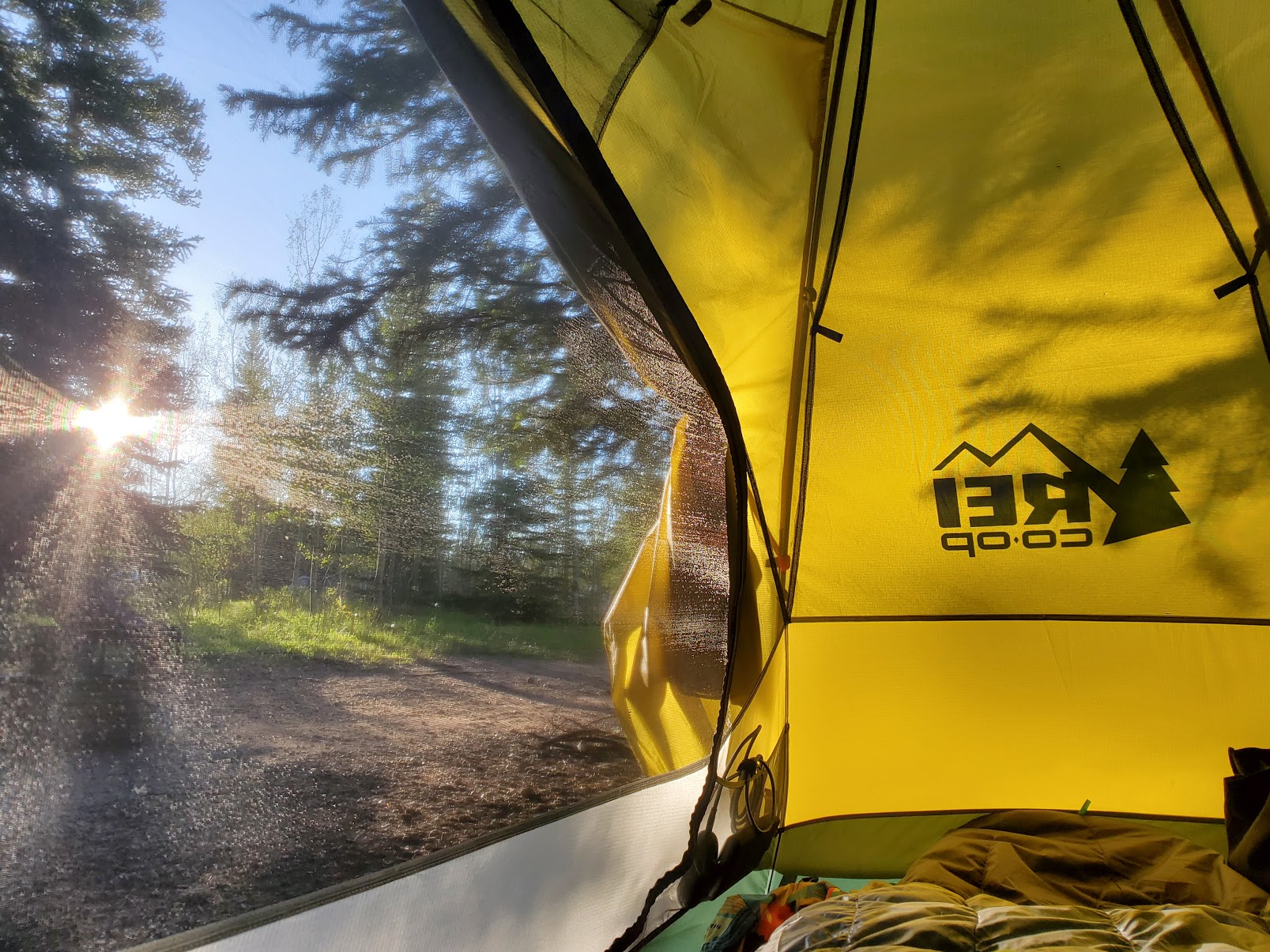 Don’t sleep on sleeping outside!